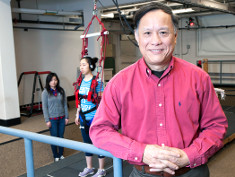 Clive Pai in front of walkway for training seniors not to fall; © Roberta Dupuis-Devlin/UIC Photo Services

Clive Pai believes people can be trained not to fall. The professor of physical therapy at the University of Illinois at Chicago will use a five-year, $1 million grant from the National Institute of Aging to develop a computerized treadmill program that could be used in physical therapy offices to prevent falls and fall-related injuries in older adults.

Each year, one in three adults over 65 falls at least once, according to the Centers for Disease Control and Prevention. Falls are the leading cause of injury in older adults and make it harder for them to get around and live independently. In 2010, more that 21,000 older adults died from injuries related to falls.

Pai has been studying how people fall for over 20 years. Everyone falls in a unique way –because it's unrehearsed and unexpected. "We have never learned how to fall," he said. His research led him to a remarkable discovery – people can be trained relatively quickly and easily how not to fall.

In a recent study, Pai enlisted adults, aged 65 to almost 90, who live independently. The subjects were never told when or how they might fall, as they trod a special walkway in his lab, strapped safely into a harness. Suddenly, like stepping on a banana peel, the footing surface slid out from under them.

"For the first time, the second time, and maybe the third time, they experienced falling. And then, all of sudden, they stopped falling," Pai said. "They were so quick to adapt – that was the real fascination to me 20 years ago."

The quickness with which his study subjects (young and old) adapted and learned not to fall as the rug was pulled out from under them was unlike any other motor-learning Pai had seen. "No one masters playing the piano or even a simple dance step after only two or three tries," he said.

Pai's lab set-up is too bulky for the typical physical therapy office, so Pai developed a computer-controlled treadmill program that replicates the training device in his lab. The new NIH grant will allow him to see if the treadmill training can be as effective.

Pai said he would like to see the day when annual preventive care for older adults would include a half hour on a treadmill, strapped into a safety harness, learning to not fall. "We want to inoculate people against falls," he said.