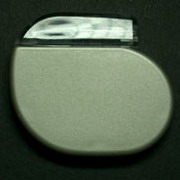 Researchers have found that cardiac pacing may help epilepsy patients with seizure-related falls due to ictal asystole, an unusual condition in which the heart stops beating during an epileptic seizure.

"During seizures, a patient's heart rate most often increases significantly, but in about 1 percent of this population, a seizure will lead to the heart stopping for a brief period of time," says Doctor Jeffrey W. Britton, a Mayo Clinic neurologist and member of the research team. "The heart almost always restarts on its own, but sometimes as much as 20 to 30 seconds can pass where no blood flows to the brain and causes the patient to collapse and fall during a seizure."

The brief period when the heart stops can lead to significant injury. "In this study, we wanted to determine if, in addition to medication, there would be any benefit to reducing falls by implanting a pacemaker," says researcher Doctor Brian D. Moseley, a neurology instructor.

Researchers identified seven patients who were diagnosed with ictal asystole and had a history of falls associated with it before undergoing cardiac pacing between 1990 and 2004.

Patients with the condition were identified through observation of their seizures during computer-assisted continuous video electroencephalography/electrocardiography (EEG/ECG).

In addition, three of the seven patients needed less seizure medication after receiving their implants. "This may argue that in addition to helping reduce falls there may be some anti-seizure properties associated with pacemaker implantation. That's an exciting finding that needs to be studied some more," says Moseley.