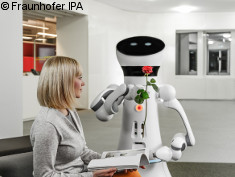 The modular construction of the service robot allows individual robot platforms to be established for a wide range of applications; © Fraunhofer IPA

The Fraunhofer Institute for Manufacturing Engineering and Automation IPA has been developing service robots since the 1990s. These can be used in areas including households, hotels, care homes and hospitals, for example. Researchers have now developed a new model centred on the concept of a universal helper for everyday scenarios: the fourth generation of the "Care-O-Bot". While its predecessors from 1998 onwards were used primarily in the development of technological fundamentals, the Care-O-bot 4 is a modular product family providing the basis for commercial service robot solutions.

Following the success of the personal computer (PC), our private and professional lives could soon be improved by personal robots (PR). These would function as a sort of "electronic butler", bringing the newspaper, pouring coffee or clearing the table. They are friendly and affable, yet remain discreetly in the background when not needed.

Together with the Stuttgart-based design studio Phoenix Design and Schunk, Fraunhofer IPA has been working on the completion of its new service robots for three years. "The fourth generation of the Care-O-bot is not only more agile, modular and charming than its predecessors, but it also stands out through the use of cost-reducing construction principles," explains Dr Ulrich Reiser, Project and Group Leader at Fraunhofer IPA. In this way, large parts of its internal construction feature folding sheet metal, which is economical to produce in small quantities.

Andreas Haug, co-Founder and Managing Director of Phoenix Design, adds: "Care-O-bot 4 is a successful symbiosis of design and engineering, as well as functionality and emotion, which quickly encourages user interaction." Its streamlined design, with two arms attached at the side and a type of head, mean that the robot is reminiscent of a human being. However, developers did not want its appearance to be over-human, as this would "encourage false expectations with regard to its capabilities" for users, says Ulrich Reiser.

It is just the robot’s "internal values" which are human: it always maintains a respectful distance, shows what it has understood and what it intends to do, while also being able to make simple gestures and reflect emotions. As with previous generations, social role models were used as a guiding vision in developing the design and functionality. While the concept for the Care-O-bot 3 was a more reserved, cautious butler, its successor is as courteous, friendly and affable as a gentleman.

The Care-O-bot 4 also features a greater range of movements in comparison with previous generations. The smart helper is fitted with patented spherical joints around discreet pivot points on its neck and hips. These allow the robot to bend forward without losing its balance. Developers took inspiration from human anatomy, creating a moving part which shifts backwards when the robot bends over, ensuring that balance is maintained. The Care-O-bot 4 does therefore not fall over when carrying a load in outstretched arms.

In comparison with its predecessors, the fields of application are far more wide-ranging for the Care-O-bot 4. Its modular construction allows various different configurations. Arms, spherical joints and sensors are optional. If the intended purpose if to serve drinks, one hand can be replaced by a tray, or the mobile base platform can be used on its own as a serving trolley. Targeted adaptation for specific tasks significantly reduces costs. Individual robot platforms can be configured for a wide range of applications: a mobile information centre in museums, DIY stores and airports, for collection and delivery services in homes and offices, for security applications or as museum robots at attractions – the Care-O-bot 4 is a safe and handy human helper at all times.

IPA developers were determined to ensure that the Care-O-bot 4 is simple to use. Users are more open to the help a robot can offer when they know that it functions properly. With this in mind, the Care-O-bot 4 is fitted with an easily accessible touchscreen on the head. Moreover, it possesses a microphone for speech recognition and cameras for personal and gesture recognition. The Care-O-bot 4’s spherical joints allow it to intuitively inform users what it is planning to do and what it has understood, including gestures such as nodding and shaking the head. A circle of LEDs on its torso area and a laser pointer in the hand serve as information exchange points.

Care-O-bot 4 offers open software interfaces that makes it easily expandable for developers. Ulrich Reiser is keen for as many scientists as possible to use the system developed in Stuttgart in order to steadily advance its possible areas of application. "The objective is to steadily grow the developer community that was established already around Care-O-bot 3," he explains. Numerous developers at research institutions and universities around the world have already worked with the Care-O-bot 3 and the new Care-O-bot 4 should follow suit.

More about the Fraunhofer Institute for Manufacturing Engineering and Automation IPA at: www.ipa.fraunhofer.de
More about Care-O-Bot at: www.care-o-bot.de