Carers for the elderly experience stress and their careers suffer 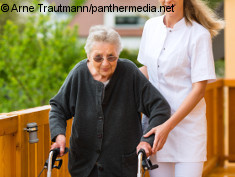 Caring for a relative while continuing their work stresses family careres a lot; © Arne Trautmann/panthermedia.net

An ageing population means that increasing numbers of people – predominantly women – need to spend time caring for elderly relatives. These carers experience high levels of stress; and if they are also in work, their careers are affected and their employers too could suffer if they lose the services of skilled people for sustained periods. Now, two University of Huddersfield researchers have begun to investigate a topic that is of mounting social and economic significance.

Psychologist Dr Viv Burr and educationalist Professor Helen Colley began their research into the impact of elder care on women’s working lives as a result of their own long-term experiences caring for elders. This gave them a special insight into the issues and led towards collaboration on a pilot study. The aim now is to develop the research and broaden its scope to include the experiences of male carers.

For the pilot study, the researchers interviewed a number of women with a variety of academic and administrative jobs who were currently providing care for an elderly relative.

"They were highly conscientious employees and reported high levels of stress as they struggled to care for an elder while continuing to carry out their work to their usual high standards," states the report compiled by Dr Burr and Professor Colley.

The women interviewed typically fitted in routine care duties at either end of their working day and usually devoted at least one day at the weekend to looking after their relative.

"This burden of care was in addition to the work involved in looking after their own homes, and some of the women fell into the 'sandwich generation', as they also had their own children still living at home," state the authors.

Elder care was also seen as highly unpredictable, involving sudden emergencies, and the elderly people cared for tend to resist outside support from agencies such as social services.

The report also describes how elder care could have a serious impact on career development, and some of the women interviewed were thinking of reducing their hours or not pursuing further qualifications or promotion.

The pilot study report is innovative in its field of research because it adopts a 'qualitative' approach and includes a series of extended quotes from carers, describing their experiences and frustrations in their own words.

"We have explored the fine grain of the experiences of carers," said Dr Burr. "This had not really been done in the past, so we didn’t know the experiences behind the statistics."

The report compiled by Dr Burr and Professor Colley includes a sequence of recommendations for carers, their line managers, human resources staff and local authorities.

For example, it is stated that flexibility in working arrangements is vital to enable carers to remain in paid work and avoid burnout. Such flexibility may already be in place, but it may not be clear that this applies to elder care as well as other family duties. Line managers play a crucial role in helping employees access such policies, and it is particularly important to raise their awareness of the need to support staff caring for elders.

"Businesses need to recognise societal change in the nature of conditions that demand care, such as early onset dementia, mental health problems and brain injuries. These mean that carers are becoming younger – from their 30s and 40s – and need to pick up their lives again in their 50s," write the researchers.

Dr Burr and Professor Colley are in no doubt about the burgeoning importance of the subject of elder care and, having completed a first phase of research – funded by the University of Huddersfield itself – they are now developing proposals for a larger, more broadly-based study, possibly including the recruitment of a doctoral student dedicated to the project.

REHACARE.de; Source: The University of Huddersfield

More about the University of Huddersfield at: www.hud.ac.uk