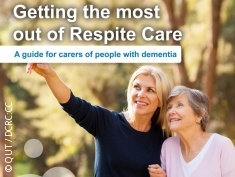 1.2million Australians are currently involved in caring for someone with dementia; © QUT / DCRC:CC

Dementia Awareness Month is being marked at Queensland University of Technology (QUT) with the launch of a unique new national guide for carers which aims to help them get the most out of respite care when they need it most.

The first of its kind in Australia, "Getting the most out of Respite Care: A guide for carers of people with dementia" targets the 1.2million Australians currently involved in caring for someone with dementia.

Dr Maria O'Reilly Research Fellow in the Dementia Collaborative Research Centre: Carers and Consumers (DCRC:CC) said the guide was put together with the input of carers rather than just professionals in the field.

"Dementia is the second leading cause of death in Australia and the single greatest cause of disability for people over 65," Dr O'Reilly said.

"Our guide was conceived after we reviewed the results of a national survey led by Dr Elaine Fielding and Professor Elizabeth Beattie from the DCRC:CC of more than 300 carers of people with dementia who were asked about their experiences and opinions of respite care.

"Most of the content has come from those survey participants but we have also had generous support and input from the Alzheimer's Australia's Consumer Dementia Research Network (CDRN), particularly for the 'tips and advice' section.

"The stories featured in the guide are very real and personal; told from the perspective of husbands, wives, sons and daughters. These stories are made even more accessible through the use of illustrations.

"There are more than a million people caring for others with dementia in Australia now and that figure is set to grow quite dramatically.

"According to Alzheimer's Australia there are now more 342,800 Australians living with dementia, a figure that will almost triple by 2050 without a medical breakthrough.

"It's increasingly critical that we look after the carers and help them navigate the support that is out there in the form of things like respite care."

Dr O'Reilly said the guide provides real life case studies as well as contact details for organisations and services that can help people with information about accessing respite care.

"Many carers feel guilty about taking a break by using either day or residential respite and yet it is so important they look after themselves," Dr O'Reilly said.

"Getting the most out of Respite Care: A guide for carers of people with dementia is designed to help carers make the decision to use respite. They can read about the experiences of others in their situation and ideally this will aid them with what can be a difficult step to take."

Vince O'Rourke, author of 'I Wish I Were a Leper' and carer for his first wife who died from Alzheimer's disease, welcomes the new guide.

"In six years of caring I had just three days off. I think carers are some of the worst at taking advice as they are focussed on looking after their loved one," said Mr O'Rourke who with his second wife Lorrae operates Carers Outlook on acreage in the Sunshine Coast hinterland as a respite centre for carers to take a break.

"Carers often believe no-one else can look after a person as well as they can but you need to be able to relinquish some control and put your trust in others. They must realise it is not selfish to look after themselves and in fact it is probably more selfish not too. Carers need respite or a holiday from their caring role for their own health and happiness but also to maintain the caring role.

"The most important aspect of this guide is that it is largely put together with the stories of other carers. Academics and medical professionals can make statements but we find that carers are more likely to listen and take advice from people that have walked that hard road themselves."

More about the Queensland University of Technology at: www.qut.edu.au