Celebrating diversity and equality, the Rio 2016 Paralympic Torch is unveiled 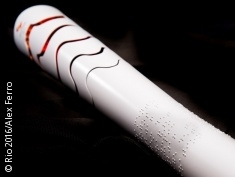 The torch has the Paralympic values inscribed in Braille along its side; © Rio 2016/Alex Ferro

The wait is over, the Rio 2016 Paralympic Torch has been unveiled. With a design that celebrates diversity and equality, the iconic symbol that will spread the spirit of the Games and the Paralympic values around Brazil was presented at a special ceremony in Rio on Friday, 11 December. Along with the torch, the route of the torch relay that will take place between 1 and 7 September was also revealed.

"The Paralympic Games are an opportunity for education and legacy and the torch radiates these values," said Andrew Parsons, President of the Brazilian Paralympic Committee (CPB) and Vice-President of the International Paralympic Committee IPC. "The Paralympic Games are the biggest event in the world for producing changes in society. With all the symbolism of the torch, this is the moment to involve the whole nation. Because, although the Games will be in Rio, they are for all of Brazil. We have a strong Paralympic presence in all regions of the country."

Rio 2016 President Carlos Nuzman said: "We are in a special moment on our journey towards the Games, a crucial stage in the transformation of Rio de Janeiro. And our athletes are examples of the strength of will power. We will put on spectacular Games, which will mark an era."

The Paralympic Torch was created from the same design concept as the Olympic Torch, celebrating passion and transformation, the essence of Rio 2016. This shared beginning illustrates the equality of the two torches. When closed, the they look the same. When opened, the Olympic and Paralympic characters reveal themselves.

The Paralympic Torch’s sinuous curves represent the highs and lows in the life of a Paralympic athlete, celebrating their determination and achievements. Its quadrangular shape refers to the four Paralympic values – courage, determination, inspiration and equality – which are also written in Braille on the torch, along with the words "Rio 2016 Paralympic Games Torch Relay".

When the Paralympic flame is lit it will illuminate a truth that is not always realised: our differences do not make us different. When the flame is passed from one torchbearer to another during the relay, the segments of the receiving torch will open in an upward motion, like a body that stretches its boundaries.

The torch and relay route were unveiled at an event in a cinema in the Largo do Machado neighbourhood of Rio. The lights were turned out in the auditorium and the audience listened to an audio narrative relating the experience of a torch bearer. The soundtrack was produced using an innovative technique that creates the perception of spatial sound coming from various directions. Then the lights were switched back on the the torch was revealed.

Between 1 and 5 September the torch relay will pass through five cities – one per day – representing the five regions of Brazil: São Paulo (South East), Joinville (South), Natal (North East), Belém (North) and (to be confirmed) Brasília (Central West). A regional flame will be lit in each city on the start of each day and when the relay has finished that evening it will be sent directly to Rio. The public will be able to contribute, in a virtual sense, to the lighting of the five regional flames, by sending their 'personal flame'.

On 2 September there will also be a ceremony in the British town of Stoke Mandeville, the birthplace of the Paralympic Games, for the lighting of the Heritage Flame. This flame will be combined with the five regional Brazilian flames in Rio de Janeiro on 6 September, forming the Rio 2016 Paralympic flame, which will be carried around Rio on the last two days of the relay, before being used to light the Paralympic Cauldron at the opening ceremony in the Maracanã Stadium on 7 September.