Cerebral Palsy: Osteopathy 'of no Benefit' to Children 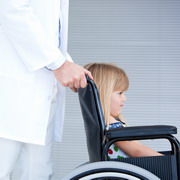 Not every treatment is really
helpful; © panthermedia.net/
Wavebreakmedia

Research commissioned by Cerebra, the charity that helps to improve the lives of children with brain conditions, has found little evidence to suggest that cranial osteopathy is of benefit to children with cerebral palsy.

Osteopathy has, over recent years, become a popular complementary treatment for children with cerebral palsy. Cerebra initially asked researchers at the CRU - Cerebra Research Unit (CRU) at the Peninsula College of Medicine & Dentistry - to investigate existing evidence regarding the benefits of osteopathy in this instance.

The research team found no properly conducted scientific studies, with only one small study that showed some improvement after osteopathy therapy – but this had very few participants and the results were difficult to interpret.

The lack of existing evidence prompted Cerebra to ask the research team to carry out a large randomised control trial in order to provide families with good evidence about the effect of osteopathy for their children with cerebral palsy.

Before the trial was designed, the CRU research team talked in detail to parents and carers of children with cerebral palsy to discuss how they would like the study to be run. This degree of parental involvement in designing a trial is very unusual, but it ensured that the team designed a trial that was acceptable to families and that addressed the issues they wanted to be answered.

The researchers also interviewed osteopaths from the Foundation of Paediatric Osteopathy to find out more about the treatment and to help design the trial – the osteopaths who interacted with the research team agreed that the trial was a sensible test of the treatment. Of the 142 children who were recruited into the trial, 133 (94 per cent) remained in the trial for the full six months.

The children were assessed 10 weeks and six months after they started the trial. The main results are those obtained at six months. The researchers found no statistically significant difference between the two groups in terms of a child's movement (which was assessed by physiotherapists who did not know if the child had received osteopathic treatment or not), the child's quality of life, the child's sleeping patterns and the child's level of pain.

There was also no difference in the quality of life score for the parents and carers in either group.

REHACARE.de; Source: The Peninsula College of Medicine and Dentistry


- More about The Peninsula College of Medicine and Dentistry: www.pms.ac.uk