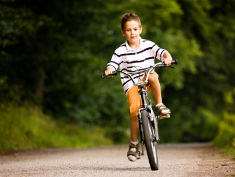 Physical activity is linked not only to health, but to social skills and mental well-being; © panthermedia.net/Arne Trautmann

Studies have shown that children with autism often struggle socially and now new research suggests that a corresponding lack of motor skills – including catching and throwing – may further contribute to that social awkwardness.

The researchers looked at two types of motor skills – "object-control" motor skills, which involve more precise action such as catching or throwing – and "locomotion" skills, such as running or walking. Students who struggled with object-control motor skills were more likely to have more severe social and communication skills than those who tested higher on the motor skills test.

"So much of the focus on autism has been on developing social skills, and that is very crucial," MacDonald said. "Yet we also know there is a link between motor skills and autism, and how deficits in these physical skills play into this larger picture is not clearly understood."

Developing motor skills can be crucial for children because students often "mask" their inability to participate in basic physical activities. A student with autism may not be participating on the playground because of a lack of social skills, but the child may also be unsure of his or her physical ability to play in these activities.

"Something which seems as simple as learning to ride a bike can be crucial for a child with autism," MacDonald said. "Being able to ride a bike means more independence and autonomy. They can ride to the corner store or ride to a friend's house. Those kind of small victories are huge." She said the ability to run, jump, throw and catch isn't just for athletic kids – physical activity is linked not only to health, but to social skills and mental well-being.

"I often show people photos of what I like to do in my spare time – canoeing, hiking, snowshoeing, and then point out that these require relatively proficient motor skills," she said. "But that is not why I do those things. I'm doing it because I'm with my friends and having fun."

MacDonald said the positive news for parents and educators is that motor skills can be taught. "We have programs and interventions that we know work, and have measurable impact on motor skill development," MacDonald said. "We need to make sure we identify the issue and get a child help as early as possible."