Children's ADHD symptoms and peer relationships influence each other over time 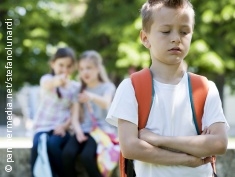 Peer rejection can have a negative impact on children's ADHD symptoms; © panthermedia.net/stefanolunardi

Children with attention deficit hyperactivity disorder (ADHD) are often restless, inattentive, and impulsive, and they have difficulty with social functioning, often having fewer friends and being rejected more than children without ADHD. In a new longitudinal study from Norway, researchers investigated the bidirectional relationship between the development of ADHD symptoms in young children and rejection by peers.

The study was conducted by scientists at the Norwegian University of Science and Technology (NTNU) Social Research division, the Regional Centre for Child and Youth Mental Health and Child Welfare in Trondheim, Norway, and the University of California, Davis. It appears in the journal Child Development.

"ADHD predicts poor relations with peers, but do poor relations with peers affect symptoms of ADHD, forming, in effect, a vicious cycle?" asks Frode Stenseng, associate professor of psychology at NTNU and the study's lead author. "We found that more ADHD symptoms at age 4 predicted more rejection by peers at age 6, and reciprocally, that greater peer rejection at age 4 predicted more symptoms of ADHD at age 6. But these effects were less evident from ages 6 to 8."

"The bottom line is that peer rejection and ADHD symptoms are related, but they may also affect each other over time," adds Jay Belsky, Robert M. and Natalie Reid Dorn Professor of Human Development at the University of California, Davis, a co author of the study. "Supplementing previous research showing that ADHD leads to poor social functioning, our study shows that the symptoms of ADHD are affected by children's experiences with their agemates."

The study looked at 962 Norwegian children at ages 4, 6, and 8 who took part in the Trondheim Early Secure Study conducted in 2007 and 2008. More than 99 percent of the children were of western ethnic origin (e.g., European, American), 86 percent of their parents lived together, and they were evenly divided between boys and girls. The children were representative of the Trondheim, Norway, community: Families were economically diverse and somewhat ethnically diverse. At the four-year followup, 661 children were part of the study.

Information was obtained from parents through interviews and questionnaires, and from teachers through questionnaires sent to child care centers and elementary schools. ADHD symptoms were measured through a diagnostic interview and on a continuum, ranging from none to many, rather than in terms of a formal psychiatric diagnosis. The number of children within the clinical range in terms of number of symptoms increased through the years of the study. However, the researchers did not determine how many in the group had a diagnosis of ADHD since a more thorough clinical assessment is needed to make such a diagnosis.

At age 8, the researchers found, symptoms of ADHD were still adversely affected by children's level of peer rejection at age 6, but the symptoms no longer had a negative effect on peer functioning.

The findings, of interest to parents, teachers, and other practitioners, highlight the importance of keeping social aspects in mind when thinking about the origins of ADHD in children, the authors suggest. In particular, helping children with their peer relationships while working with them on their ADHD symptoms could augment the benefits to children.

The authors caution that their study was conducted in a country with strong social welfare supports and that while the sample overall was large, the number of children with many symptoms of ADHD was relatively small. However, the findings suggest the potential value of, and need to directly evaluate, interventions that simultaneously target ADHD symptoms and peer relationships.

More about the Society for Research in Child Development at: www.srcd.org