Children with Allergy, Asthma May Be at Higher Risk for ADHD 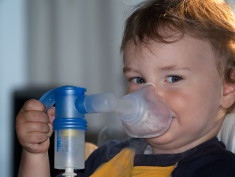 There is an increased risk of ADHD in boys that have a history of allergy or asthma; © Alexander Jahnke/
panthermedia.net

The number of children being diagnosed with attention-deficit disorder (ADHD), allergy and asthma is increasing in the United States. And according to a new study, there might be a link between the growth of these three conditions.

Researchers in the Netherlands and Boston studied 884 boys with ADHD and 3,536 boys without the disorder. Of the children with ADHD, 34 percent had asthma and 35 percent had an allergic disorder. The study suggests medications used to treat these conditions may be associated with an increased ADHD risk.

"Further research is needed to understand why there appears to be an increased risk of developing ADHD in children with allergy and asthma," said Gailen Marshall, editor-in-chief of Annals of Allergy, Asthma & Immunology. "Medications for these conditions far outweigh the risks, and can be life-saving in some conditions. Treatment should not be stopped, unless advised by a board-certified allergist."

According to the American College of Allergy, Asthma, and Immunology, allergy and asthma often run in families. If both parents have an allergy a child has a 75 percent chance of being allergic. If neither parent has allergy, the chance of a child developing an allergy is only 10 to 15 percent. Allergists also know allergies and asthma are linked. An estimated 60 to 80 percent of children with asthma also have an allergy. While the cause of ADHD is unknown, this disorder is also thought to run in families.

More about the American College of Allergy, Asthma, and Immunology at: www.acaai.org