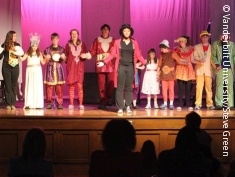 Children with and without autism participated in the SENSE theatre production of "Circus delSe'" by Blyth Corbett; © Vanderbilt University/Steve Green

Acting is an inherently interactive process that involves many aspects of socializing – observing, perceiving, interpreting and expressing thoughts, feelings and ideas. And Blythe Corbett, Ph.D., an associate professor at Vanderbilt University and investigator with the Vanderbilt Kennedy Center, calls it a benefit for children with autism spectrum disorder.

The findings from Corbett's new randomized control trial, funded by the National Institute of Mental Health (NIMH), provide some convincing evidence of the benefits of theatre for improving social competence in autism. "We measured many aspects of social ability and found significant treatment effects on social cognition, social interaction and social communication in youth with autism," Corbett said.

The study consisted of 30 children ages 8-14, with 17 randomized to an experimental group and 13 in the control group. The treatment group showed notable changes in the ability to identify and remember faces, which was corroborated by changes in brain patterns that arise when study participants saw a familiar face.

Participants who participated in the theatre program also showed more group play with children outside the treatment setting, as well as improvement in social communication at home and in the community that was maintained for at least two months.

In addition to utilizing theatre techniques, such as role-playing and improvisation, participants in SENSE Theatre are paired with typically developing peer actors from the University School of Nashville.

These "expert models", as Corbett calls them, are trained to provide a supportive, engaging, and dynamic learning environment for the children with autism, allowing them to practice and perform vital social skills. In fact, the finale to the 40-hour treatment is the performance of a play in which participants and peers alike share the stage in a unique collaboration between art and science.

"Peers can be transformative in their ability to reach and teach children a variety of fundamental social skills," Corbett said. "And, combined with acting techniques that enhance our ability and motivation to communicate with others, the data suggests we may be setting the stage for lasting changes in how our children with autism perceive and interact with the social world."

More about the Vanderbilt University Medical Center at: www.mc.vanderbilt.edu/npa