Children with autism who live with pets are more assertive 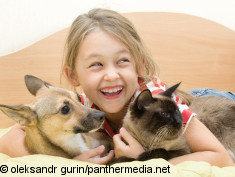 Dogs and other pets play an important role in individuals' social lives, and they can act as catalysts for social interaction, previous research has shown. Although much media attention has focused on how dogs can improve the social skills of children with autism, a University of Missouri (MU) researcher recently found that children with autism have stronger social skills when any kind of pet lived in the home.

"When I compared the social skills of children with autism who lived with dogs to those who did not, the children with dogs appeared to have greater social skills," said Gretchen Carlisle, research fellow at the Research Center for Human-Animal Interaction (ReCHAI) in the MU College of Veterinary Medicine. "More significantly, however, the data revealed that children with any kind of pet in the home reported being more likely to engage in behaviors such as introducing themselves, asking for information or responding to other people's questions. These kinds of social skills typically are difficult for kids with autism, but this study showed children's assertiveness was greater if they lived with a pet."

Pets often serve as "social lubricants," Carlisle said. When pets are present in social settings or a classroom, children talk and engage more with one another. This effect also seems to apply to children with autism and could account for their increased assertiveness when the children are living in a home with pets, Carlisle said.

"When children with disabilities take their service dogs out in public, other kids stop and engage," Carlisle said. "Kids with autism don't always readily engage with others, but if there's a pet in the home that the child is bonded with and a visitor starts asking about the pet, the child may be more likely to respond."

Carlisle also found that children's social skills increased the longer a family had owned a dog, yet older children rated their relationships with their dogs as weaker. When children were asked, they reported the strongest attachments to smaller dogs, Carlisle found.

"Finding children with autism to be more strongly bonded to smaller dogs, and parents reporting strong attachments between their children and other pets, such as rabbits or cats, serves as evidence that other types of pets could benefit children with autism as well," Carlisle said.

Carlisle surveyed 70 families who had children with autism between the ages of 8 and 18.The children were patients at the MU Thompson Center for Autism and Neurodevelopmental Disorders. Almost 70 percent of the families that participated had dogs, and about half of the families had cats. Other pets owned by participants included fish, farm animals, rodents, rabbits, reptiles, a bird and even one spider.

"Dogs are good for some kids with autism but might not be the best option for every child," Carlisle said. "Kids with autism are highly individual and unique, so some other animals may provide just as much benefit as dogs. Though parents may assume having dogs are best to help their children, my data show greater social skills for children with autism who live in homes with any type of pet."