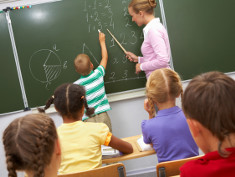 Language skills improve when pupils with disabilities are included in classes with typical peers; © Dmitriy Shironosov/panthermedia.net

The study involved 670 preschool-aged children enrolled in 83 early childhood special education classrooms in Ohio. About half of the children had an Individualized Education Plan, signaling presence of a disability. Between 25 and 100 percent of children in each classroom had a disability.

All children's language skills were measured in the fall and spring of the academic year with a commonly used test called the Descriptive Pragmatics Profile. The average score of all children in an individual classroom was used to determine each child's relative status in terms of language development, and whether their classmates were more highly skilled, less skilled or average. While all children's language skills were affected somewhat by the skill levels of their classmates, the effect was strongest for those with disabilities, the study found.

This study, like others, finds that the most highly skilled students are the ones whose language improvement is least affected by the skill of their classmates, Justice said. "The highly skilled children aren't hurt by being in classrooms with children who have disabilities," she said. "But children with disabilities are vulnerable if they aren't placed with more highly skilled peers."

Peers help because they spend more time one-on-one with their fellow classmates than teachers can. Children with disabilities have the opportunity to observe, imitate and model the language use of their peers who do not have disabilities. "In a sense, the typically developing children act as experts who can help their classmates who have disabilities," Justice said.

Statistics from the U.S. Department of Education show that more than half of preschoolers with disabilities are enrolled in early childhood classrooms with typically developing peers.

Justice said these results suggest that all preschoolers with disabilities would benefit from inclusion policies. "We have to give serious thought to how we organize our classrooms to give students with disabilities the best chance to succeed," she said.