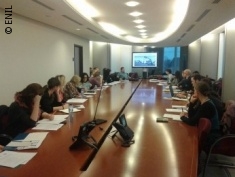 The EU Alliance Against Disability Cuts works together to expose the Europe-wide social and human rights crisis; © ENIL

On the 2nd December, right before the International Day of persons with disabilities, the EU Alliance Against Disability Cuts held an open meeting in the European Parliament hosted by MEP Richard Howitt (S&D, UK). The event provided an opportunity to take stock of the deleterious conditions in which many disabled persons find themselves after substantial cuts were applied by national governments to their allowances and support services.

Undoubtedly the economic crisis in Europe affected all European citizens, however, the most severely and disproportionately hit were and unfortunately still are disabled people. These cuts are primarily affecting services aimed at promoting and facilitating Independent Living, such as personal assistance, other community-based services and direct payments which in turn have negative consequences on the enjoyment of human rights.

The EU Alliance Against Disability Cuts works together to expose this Europe-wide social and human rights crisis, by raising awareness about it and putting it higher on the European political agenda. During the event, a proposal for a Resolution of the European Parliament on the effect of cuts in public spending on disabled persons in the EU was presented.

"Testimonies and evidence shown us today prove once again that in many European countries disabled people are seen as an easy target and are hit disproportionally by cuts and austerity measures. This pushes disabled people and their families into more dependency, institutionalization, poverty and marginalization," said Peter Lambreghts, Senior Officer of the European Network on Independent Living (ENIL). "Today we saw a firm engagement from MEPs and civil society to cooperate and stop and reverse this human rights crisis. The broad support from MEP’s from all political groups for our proposal for a resolution from the European Parliament in our open meeting today is a hopeful step in the right direction."

"EU policy instruments such as the European Semester should be used to enhance Member States policies towards the realisation of inclusive societies where citizens with support needs are empowered to become active contributors and are not left behind," added Luk Zelderloo, Secretary General of EASPD.

Catherine Naughton, director of EDF, pointed out that disproportioned cuts and austerities are in straight violation with the UN CRPD as was confirmed by the expert committee in their concluding observations on the EU. The Euro crisis turned out to be a human right crisis for disabled people.

Richard Howitt MEP, who hosted the meeting as Co-President of the European Parliament’s all-party Disability Intergroup, said: "More than 80 people in my own country, Great Britain, are dying each month shortly after being declared 'fit for work', as an attempt by the government to move them off benefits. This shows that the fight against disability cuts isn’t just about poverty, isolation, misery and destitution – the quality of life – it is about life itself."