Cochlear implant users can hear, feel the beat in music 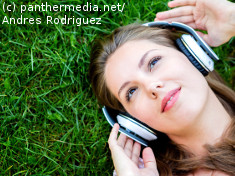 Exposure to the beat in music, such as drums, can improve the emotional and social quality-of-life of cochlear implant users; © panthermedia.net/ Andres Rodriguez

People who use cochlear implants for profound hearing loss do respond to certain aspects of music, contrary to common beliefs and limited scientific research, says a research team headed by an investigator at Georgetown University Medical Center.

The scientists say exposure to the beat in music, such as drums, can improve the emotional and social quality-of-life of cochlear implant users and may even help improve their understanding and use of spoken language.

"The cochlear implant is designed for language perception - which works though with some flaws for the population studied - but not for music perception. By using music that emphasizes a beat, we may be able to improve both," says the study's lead investigator, Jessica Phillips-Silver, PhD, a postdoctoral researcher in Georgetown University Medical Center's Laboratory of Integrative Neuroscience and Cognition led by Joseph P. Rauschecker, PhD.

Previous research has shown that cochlear implants, which bypass the outer and inner ears to directly stimulate fibers of the auditory nerve, are deficient in transmitting the pitch and tone quality of music; users report hearing noise when music is played. Consequently, they may receive little training in music or musical movement.

In this study, investigators sought to objectively measure if users can synchronize body movement in time to music with a regular beat, comparing their performance to that of hearing individuals.

"We wanted to see if cochlear implant users heard and felt the beat, and if this tapped into sensory and motor areas in the brain," says Phillips-Silver.

They tested nine users of cochlear implants and nine hearing participants, asking them to react to three different renditions of a popular style of Latin dance music that has a heavy beat. Participants wore a Nintendo Wii to measure body movement.

The researchers found that both groups were able to move in time to the beat when drum music was used, although synchronization was greater in hearing participants. "The advantage of drum music to implant users is likely reduction of the complexity of the music as well as absence of pitch variation, which cannot be processed by the implants," Phillips-Silver says.

The study suggests that cochlear implant users can enjoy a myriad of musical benefits if the composition significantly emphasizes the beat, she says. "We know that music training engages some brain plasticity - it refines the sense of rhythm, benefitting the perception of speech, so that may help them understand spoken language. But also there is so much enjoyment in music - a strong beat activates the joy of body movement," Phillips-Silver says. "What we hear is what we feel and what we feel is what we hear."

More about the Georgetown University Medical Center at: http://gumc.georgetown.edu