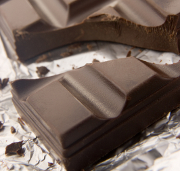 The results of this initial study has led to the implementation of larger, placebo-controlled clinical trial at UC San Diego School of Medicine to assess if patients with heart failure and diabetes show improvement in their exercise capacity when treated with epicatechin-rich cocoa.

The study looked at five profoundly ill patients with major damage to skeletal muscle mitochondria. Mitochondria are structures responsible for most of the energy produced in cells. These "fuel cells" are dysfunctional as a result of both type 2 diabetes and heart failure, leading to abnormalities in skeletal muscle. In patients with heart failure and diabetes abnormalities in both the heart and skeletal muscle result in impaired functional capacity. These patients often complain of shortness of breath, lack of energy and have difficulty walking even short distances.

The trial participants consumed dark chocolate bars and a beverage with a total epicatechin content of approximately 100 mg per day for three months. Biopsies of skeletal muscle were conducted before and after treatment. After the three-month treatment, the researchers looked at changes in mitochondria volume and the abundance of cristae, which are internal compartments of mitochondria that are necessary for efficient function of the mitochondria, and measurable by electron microscopy.

"The cristae had been severely damaged and decreased in quantity in these patients," said Doctor Francisco J. Villarreal of UC San Diego's Department of Medicine's Division of Cardiology. "After three months, we saw recovery – cristae numbers back toward normal levels, and increases in several molecular indicators involved in new mitochondria production."

The results, which mimicked earlier studies showing improvement in skeletal and heart muscle function in animal models after treatment with epicatechin, were promising enough to prompt the larger study.


- More about University of California - San Diego at: www.ucsd.edu