College studies may reduce risk of dementia for older adults 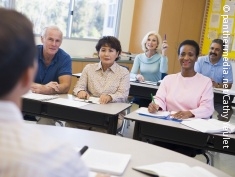 Going back to school in old age could boost cognitive capacity and decrease risk of dementia; © panthermedia.net/ Cathy Yeulet

Older adults who take college courses may increase their cognitive capacity and possibly reduce their risk for developing Alzheimer's disease or other forms of dementia, according to new research published by the American Psychological Association.

An Australian study called the Tasmanian Healthy Brain Project recruited 359 participants ages 50 to 79 who took a series of cognitive tests before completing at least a year of full-time or part-time study at the University of Tasmania. Participants were reassessed annually for three years following their studies. More than 90 percent of the participants displayed a significant increase in cognitive capacity, compared with 56 percent in a control group of 100 participants who didn't take any college courses.

"The study findings are exciting because they demonstrate that it's never too late to take action to maximize the cognitive capacity of your brain," said lead researcher Megan Lenehan, PhD. "We plan to follow these participants as they age to see if college studies could help delay the onset or reduce the debilitating effects of dementia."

Previous studies have examined how exercise, brain games and an active social life may boost cognitive capacity and possibly stem cognitive decline associated with aging. This study is the first to examine similar positive effects from college courses taken by older adults, said Lenehan, of the University of Tasmania.

The study participants, who were screened to exclude people who had dementia, completed a baseline series of tests to measure cognitive capacity, or an individual's ability to use brain networks efficiently in areas such as memory, information processing, decision making and planning. The participants in the college studies group took a wide range of courses, including history, psychology, philosophy and fine art. Most of the students took courses on campus, but some completed online classes. The researchers suspect that campus study may provide greater benefits in boosting cognitive capacity because of social interaction with professors and fellow students, but the study didn't analyze any differences between on-campus or online courses.

The participants completed the same cognitive tests each year during the four-year study, with 92 percent of the college-studies group displaying a significant increase in cognitive capacity, while the remaining 8 percent generally maintained their cognitive capacity.

For the control group, 56 percent displayed a significant increase in cognitive capacity, while 44 percent had no change. The participants' age, gender, feelings of well-being or level of social connectedness didn't affect the findings. The research was published online in the journal Neuropsychology.

Prior research has shown that college study earlier in life may increase cognitive capacity, and it appears the same may be true for older adults, Lenehan said.

"It is possible that any mentally stimulating activity later in life may also enhance cognitive capacity, such as other adult-education classes or programs to increase social interaction," she said.

The participants who took college classes volunteered for the study so they probably had a greater interest in continuing education that the general senior population, the journal article noted. The study was too short to reveal any long-term effects so the researchers plan to follow the participants as they age to provide additional evidence of whether college studies may reduce the risk or delay the onset of dementia.

More about the American Psychological Association at: www.apa.org