Combating Loneliness in Old Age with a Virtual Friendship Coach 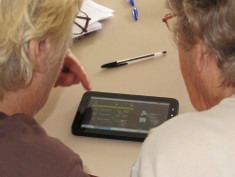 The aim of V2me is to reduce loneliness in old age, and thus help older persons find new companions; © University of Amsterdam

Scientists at Graz University of Technology together with international partners have developed concepts for computer applications to reduce loneliness in old age. The “Virtual Coach Reaches Out To Me” program, in short V2me, is meant to help the 65+ generation to find new friends, become more socially active, and stay mobile and mentally fit.

In initial tests in homes for the elderly, a draft version of the interactive friendship coach enjoyed great popularity. The final evaluation phase of the prototype commenced in May with a broad user study.

Our population is becoming increasingly older and in old age, often more lonely. A person's social environment shrinks on retirement and through deaths of acquaintances. “The aim of V2me is to reduce loneliness in old age, and thus help older persons find new companions and more joy of life. Of course, a computer program cannot replace people but it can help them to make contact with others,“ explains Sven Havemann of the Institute of Computer Graphics and Knowledge Visualization at Graz University of Technology, whose team developed V2me together with nine international partners. The software makes use of a virtual coach in the form of an animated 3D figure which is a direct contact person for the user. “The coach motivates the user to become socially active, connect with other people and go out and mix. The aim is to make sustainable friendships,“ says Havemann.

The V2me coach converses with the user in a virtual sitting room. It asks how the elderly person is feeling and instructs its protégé in twelve “friendship lessons” developed by psychologists. These include how to mix with strangers, expectations of friendship, and how to start a conversation with people you don’t know. Additionally, the user can join various groups if he is interested. “The times and dates of group meetings, for instance group walks, are automatically entered in the digital appointment calendar just like individual suggestions for events. The virtual coach then reminds the elderly person of these meetings,” adds Havemann.

A central aspect of the virtual coach is user friendliness. “V2me is designed to be elderly-person friendly. Symbols from daily life help to orientate the person on the display, and the 3D computer graphics bring the program to life,“ continues Havemann. All applications take place in a virtual sitting room where contacts, the individual appointments calendar and street directions to events can all be easily managed.

Additionally, there’s a mobile solution for a tablet PC with a user-friendly touch-interface, and a web platform with the help of which the user’s relatives can exchange information with the supervisors of the care facility and can enter appointments in the calendar. The program is meant to be used initially in homes for the elderly, which meanwhile have almost all the necessary hardware available. In the future, it is envisaged that V2me coaches elderly persons in their own homes to make contact with others.

The prototype has been ready by the beginning of May and the developed concepts are now being tested by psychologists in Amsterdam and Luxemburg in broad user studies. Previous versions have already been tested in a variety of homes for the elderly in Germany, Finland and the Netherlands. “Reactions have been very positive and have shown us that the coach fills a gap in the fight against loneliness in old age. One of the participants didn’t want to give it back,“ reports Havemann. The evaluation will show whether or not computers can lend support and be accepted in such a sensitive field as sustainable friendship.

Scientists from Graz University of Technology are working on the project together with nine partners from six different countries, among them universities, research institutes, IT companies in the healthcare sector and a social welfare institution. The part carried out by Graz University of Technology is in visualization and animation. V2me is supported by the Austrian Research Promotion Agency and is part of the AAL Joint Program EU project dealing with IT applications supporting older people and those in need of care.

More about Graz University of Technology at: www.tugraz.at