Communication made easier for children with cerebral palsy 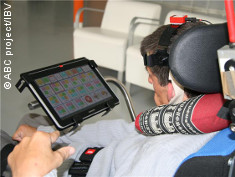 The Biomechanics Institute of Valencia (IBV) has coordinated the ABC project (Augmented BNCI Communication), a European initiative that has developed a new brain-computer interface system to enhance communication skills of people with cerebral palsy from childhood, improving the relationship with their environment and the expression of emotions.

Cerebral palsy affects 1.5 per 1,000 people in Spain, being the first cause of childhood disability. People with Dyskinetic Cerebral Palsy (DCP), 15 percent of the cases, despite having their intelligence preserved, cannot speak or express themselves because they have no motor control. This means a serious difficulty to establish relations with their environment which hampers the cognitive and emotional development of this group. "Since they cannot express themselves, these children do not connect with other people and end up not developing their intelligence" said Juanma Belda, IBV researcher.

In order to overcome these limitations, "we have developed a functional prototype of the ABC system validated and operational in real life contexts. This is a communication system that offers different interaction modes including a brain-computer interface. As a result of the project we have developed a communicator that is available free of charge for Android tablets," said Juanma Belda.

The ABC communicator is composed of 4 independent modules based on the latest breakthroughs in neural signal processing, computer-assisted alternative communication and monitoring of biosignals.

The application, developed and evaluated with users by the IBV, is fully customisable and configurable in any language based on user characteristics. This programme allows the user to communicate with his or her environment to perform daily life activities and to communicate with other people.

The ABC communicator can be used on a tablet as an entry interface with three separate systems (via wifi) besides the tactile. These are inertial sensors (similar to the mobile phone technology that registers activity), electromyography systems (EMG) which detect the voluntary contraction of a muscle and brain computer interfaces.

According to Juanma Belda, "we found that placing either of these systems on the child with cerebral palsy, together with the tablet that we place on the wheelchair, enables the child to express his or her needs. A short training is required but it is easier than the learning process that any child needs to learn to read or write."

Emotions are an important aspect when it comes to expressing ourselves. Another innovation that ABC includes is the possibility of detecting the emotional state of DCP users to express this state and to help to manage their emotions. The system contains a skin sensor that can detect five emotional states such as positive (high and low intensity), neutral and negative (low and high intensity).

The ABC system includes a health module that works like a sports bracelet that controls vital signs such as pulse and breathing. In addition, stressed Belda, "the devices that the ABC application works with include products that can be easily purchased at specialised stores."

The final meeting of the ABC project took place in AVAPACE (Valencian Association of Support for Cerebral Palsy). AVAPACE has facilitated the involvement of professionals and people with cerebral palsy, from the design phase to the validation of the system in collaboration with the Biomechanics Institute of Valencia.