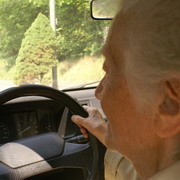 Researchers studying driving habits and accident rates among the elderly found a majority surveyed supported mandatory retesting of drivers based on age while saying they would hand over the keys if a doctor or loved one said they were no longer fit to drive.

"We are now exploring the idea of an advance directive for driving where someone would be designated to take away your keys at some point," said Emmy Betz at the University Of Colorado School Of Medicine who led the study.

Some 89 per cent said they might quit driving if their doctor advised it compared to 75 per cent who would agree if it was their family's idea. Twelve percent reported a crash in the last year and 87 per cent of current drivers said they had at least one medical diagnosis possibly linked to increased crash risk. The elderly drivers also reported taking a median of seven medications each.

Betz, an associate professor of emergency medicine, said the problem is growing as more and more baby boomers retire. Still, she said, despite sensational stories of the elderly crashing into crowds or running people down, drivers over age 75 are responsible for only four percent of pedestrian fatalities. But older drivers do have high motor vehicle accidents per miles driven with less ability to recover from injuries due to their often frail condition.

"We are trying to develop a screening test to identify higher risk drivers," Betz said. "The tool is a simple questionnaire with questions like, `Do you get confused by driving? Do people recommend you stop driving?'" The question is who should notify the Department of Motor Vehicles, if someone is deemed unsafe to drive - doctors, family or both?

Each state has its own method of determining whether elderly drivers are competent, most include a vision test. "It is not all about vision. There are complications from diabetes that may affect driving, cognitive problems – does a person forget how to make a left turn? – and dementia which may develop in some at age 60 and others at 90," Betz said. "The drugs they may be taking could also have side-effects that impact driving ability. Ultimately, this is a public health issue that needs to be addressed in a coherent way involving family, doctors and state authorities."


- More about the University of Colorado Denver at www.ucdenver.edu