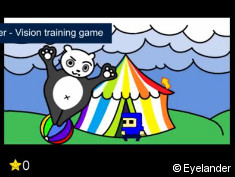 The animated character has to navigate a series of obstacles across 12 levels, like the naughty panda; © Eyelander

Developed by a team of neuroscientists and video game designers from the University of Lincoln, UK, and the WESC Foundation, one of the UK's leading specialist schools for visually impaired children, the Eyelander game features exploding volcanoes, a travelling avatar and animated landscapes. They hope the game could hold the key to helping visually-impaired children lead independent lives.

The idea is to improve the functional vision of children who have sight issues due to a brain injury rather than damage to the eye itself. Functional vision is used to perform everyday tasks such as safely crossing the road or finding a book on a bookshelf, but when the visual pathways between the brain and the eyes become damaged, the messages aren’t correctly relayed and the visual field becomes reduced.

There are around 25,000 blind and partially-sited children in the United Kingdom – equating to two children per 1,000. The causes of blindness in children are varied, but cerebral visual impairment (damage to areas of the brain associated with vision) is among the most common.

Computational neuroscientist Jonathan Waddington is conducting the trials of Eyelander at WESC, overseen by Timothy Hodgson, Professor of Cognitive Neuroscience and Head of the School of Psychology at the University of Lincoln and Conor Linehan, a specialist in computer game development based in Lincoln's School of Computer Science.

Jonathan said: "What we are aiming to do is improve the patient’s functional vision, which is needed to perform tasks of independent living. We are tapping into the brain’s innate ability to adapt (also known as neuroplasticity), and because substantial changes in vision are possible even into adulthood, this could yield real results.

"The game draws on existing training programs, which only offer black and white, two-dimensional shapes, and no interaction. The key to making the game successful is that we have combined our knowledge of neuroscience and psychology with expertise in game development so it is both effective and engaging.

"Clinical trials will get under way this summer to evaluate whether the software could become a valuable new tool for the treatment of children and young adults with visual impairments."

Gamers begin by helping the main character, Eyelander, safely escape an erupting volcanic island. The animated character then has to navigate a series of obstacles across 12 levels, ranging from a stampede of angry cows and an oversized baby, to a UFO and a naughty panda. The scenes change and include an enchanted forest, a swamp owned by a friendly alligator called Barry, a fairground, and a secret laboratory.

In the early levels, players must find a shape on the screen which is surrounded by a group of similar 'distracting' shapes, and track its movement. As the game progresses, multiple colours and more distracting shapes are introduced.

The game also features advanced options to adapt the difficulty to the specific cognitive and visual impairment of the person playing, such as changing the size or number of shapes, and the amount of time the player has to complete each level.

During the clinical trial phase visually-impaired children and young adults from ages eight to 25 will have the game installed on a home computer and complete the tasks in their own time to emulate the environment in which the software would be used.

Hodgson said: "Research has already shown that this type of training can lead to significant recovery of sight following damage to visual centres of the brain in adults, so it is vital that those using it are motivated by something interesting and engaging."

More about the University of Lincoln at: www.lincoln.ac.uk