Controlling Your Computer With Your Eyes 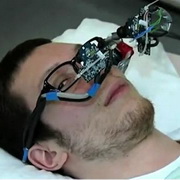 The eye control brings hope for
many handicapped people; © IOP

Millions of people suffering from Multiple Sclerosis, Parkinson's, muscular dystrophy, spinal cord injuries or amputees could soon interact with their computers and surroundings using just their eyes, thanks to a new device that costs less than £40.

Composed from off-the-shelf materials, the new device can work out exactly where a person is looking by tracking their eye movements, allowing them to control a cursor on a screen just like a normal computer mouse.

The technology comprises an eye-tracking device and "smart" software. Researchers from Imperial College London demonstrated its functionality by getting a group of people to play the classic computer game Pong without any kind of handset. In addition users were able to browse the web and write emails "hands-off".

The GT3D device is made up of two fast video game console cameras, costing less than £20 each, that are attached, outside of the line of vision, to a pair of glasses that cost just £3. The cameras constantly take pictures of the eye, working out where the pupil is pointing, and from this the researchers can use a set of calibrations to work out exactly where a person is looking on the screen.

Even more impressively, the researchers are also able to use more detailed calibrations to work out the 3D gaze of the subjects – in other words, how far into the distance they were looking. It is believed that this could allow people to control an electronic wheelchair simply by looking where they want to go or control a robotic prosthetic arm.

To demonstrate the effectiveness of the eye-tracker, the researchers got subjects to play the video game Pong. In this game, the subject used his or her eyes to move a bat to hit a ball that was bouncing around the screen – a feat that is difficult to accomplish with other read-out mechanisms such as brain waves (EEG).

Aldo Faisal, Lecturer in Neurotechnology at Imperial's Department of Bioengineering and the Department of Computing, is confident in the ability to utilise eye movements given that six of the subjects, who had never used their eyes as a control input before, could still register a respectable score within 20 per cent of the able bodied users after just 10 minutes of using the device for the first time.
The commercially viable device uses just one watt of power and can transmit data wirelessly over Wi-Fi or via USB into any Windows or Linux computer.

The GT3D system has also solved the 'Midas touch problem', allowing users to click on an item on the screen using their eyes, instead of a mouse button. This problem has previously been resolved by staring at an icon for a prolonged period or blinking; however, the latter is part of our natural behaviour and happens unintentionally. Instead, the researchers calibrated the system so that a simple wink would represent a mouse click, which only occurs voluntarily unlike the blink.

"Crucially, we have achieved two things: we have built a 3D eye tracking system hundreds of times cheaper than commercial systems and used it to build a real-time brain machine interface that allows patients to interact more smoothly and more quickly than existing invasive technologies that are tens of thousands of times more expensive,” said Faisal. "This is frugal innovation; developing smarter software and piggy-backing existing hardware to create devices that can help people worldwide independent of their healthcare circumstances."


- More about the Institute of Physics at: www.iop.org
- Watch a video of somebody using the device to play Pong by clicking here