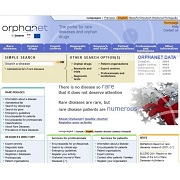 80 per cent of rare diseases have
a genetic origin; © Orphanet

“Rare diseases”, by their very definition, occur in no more than 5 people out of every 10,000 inhabitants. Barely noticed by the general public, only around 1,000 of the currently 6,000 or so different rare diseases currently listed on the Internet platform Orphanet are treatable nowadays.

“And only a very small number are curable,” says Till Voigtländer from the Clinical Institute of Neurology at the MedUni Vienna and an expert on rare diseases.

80 per cent of rare diseases have a genetic origin, with the remaining 20 per cent being caused by diseases of the immune system, infections or poisoning. Clinically, rare diseases are frequently characterised by a severe, chronic progression of the disease and/or a shortened life expectancy.

So it is all the more important to create awareness of this type of disease, for example at the Austrian Congress on Rare Diseases 2011 at the MedUni Vienna, which is being held on the 2nd and 3rd of December and arranged jointly by Till Voigtländer and Reginald Bittner from the Centre for Anatomy and Cell Biology. Rare (or “orphan”) diseases that have “made it” into the public eye, primarily thanks to the initiatives of patient self-help groups, include epidermolysis bullosa (“butterfly children”), Duchenne’s muscular dystrophy or cystic fibrosis, as well as numerous cancer-related illnesses affecting children.

Many patients with rare diseases, says Voigtländer, wait a long time until their condition is diagnosed, partly because many clinicians do not recognise the conditions and do not interpret the symptoms correctly. Even today, it is perfectly possible that many patients are still living without a diagnosis. Estimates by experts, however, predict that around five to eight per cent of the population are affected by a rare disease or will be affected by one during the course of their lifetime: this equates to around 400,000 Austrians.

Rare diseases represent a particular challenge for research. “Given the scarce research funding currently available for rare diseases, charity projects and fund-raising initiatives by research organisations set up to research these diseases and to establish more targeted diagnosis are absolutely essential,” says Reginald Bittner in his role as Vice President of the “Österreichische Muskelforschung” research association. “It is important to raise awareness in all areas, and we want to do this through our congress,” says Voigtländer. “One ideal goal would be a centre for rare diseases at the MedUni Vienna, where patients could be looked after and research carried out into their conditions across numerous disciplines. There are already several of these centres in Germany.”

By the end of 2013, there is set to be a national plan of action for rare diseases in every European member state, following an initiative and the recommendation of the EU. In this context, the MedUni is cooperating closely with the national coordination centre for rare diseases, which was set up in January 2011 at Gesundheit Österreich GmbH and which acts, amongst other things, as an information hub for clinicians, scientists, sufferers and their relatives.


- More about the Medical University of Vienna at www.meduniwien.ac.at