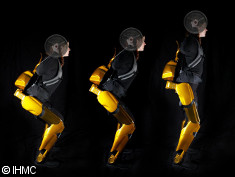 Researchers are developing a design framework that will help speed the design of powered exoskeletons for the lower body; © IHMC

Today, exoskeletons are available commercially, but they pose several problems. They take a long time to design and fabricate, for example, and the models, while costly to create, can be ill-fitting.

Joo H. Kim, an assistant professor of mechanical engineering at the NYU Polytechnic School of Engineering, is addressing those issues and has won a three-year, $539,176 National Robotics Initiative grant from the National Science Foundation to advance his research, which will have particular utility for those with disabilities affecting the lower limbs. Kim's exoskeletons could also help military personnel and people in the construction industry who need to carry heavy loads over long distances. The Florida Institute for Human and Machine Cognition (IHMC) will collaborate on fabricating and testing the new exoskeletons.

Kim, who leads the project, expects to establish a user-centered design framework for powered lower-extremity exoskeletons, in which human-exoskeleton physical interactions and dynamics can be predicted and optimized. Based on an initial design that was developed by IHMC and NASA, the research will include mathematical models of performance and stability control integrated into the design, resulting in accelerated development and better performing assistive devices at reduced cost.

"The end user's individual requirements will be considered right from the very beginning--and at each stage of the process," Kim explains. "By providing highly customized design, a reduced design cycle, optimized systems with light weight and natural motion, and improved user comfort and safety, we are bringing exoskeleton technologies to the next level."

More about the New York University Polytechnic School of Engineering at: www.poly.edu