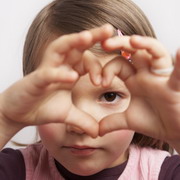 Deaf people may be especially
adept at picking up on subtle
visual traits; © panthermedia.net/
Arne Pastoor

Deaf people who use sign language are quicker at recognising and interpreting body language than hearing non-signers, according to new research from investigators at University of California - Davis.

The work suggests that deaf people may be especially adept at picking up on subtle visual traits in the actions of others, an ability that could be useful for some sensitive jobs, such as airport screening.

"There are a lot of anecdotes about deaf people being better able to pick up on body language, but this is the first evidence of that," said David Corina of the UC Davis Department of Linguistics and Centre for Mind and Brain.

Corina and colleagues measured the response times of both deaf and hearing people to a series of video clips showing people making American Sign Language signs or "non-language" gestures, such as stroking the chin.

This work is important because it suggests that the human ability for communication is modifiable and is not limited to speech, Corina said. Deaf people show us that language can be expressed by the hands and be perceived through the visual system. When this happens, deaf signers get the added benefit of being able to recognise non-language actions better than hearing people who do not know a sign language, Corina said.

The study supports the idea that sign language is based on a modification of the system that all humans use to recognise gestures and body language, rather than working through a completely different system, Corina said.


- More about the University of California - Davis at: www.ucdavis.edu