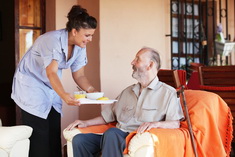 Meal delivery helps many seniors to stay in
their homes when only low-care is required;
© mandy godbehear/panthermedia.net

The more states spend on home-delivered meals under the Older Americans Act (OAA), the more likely they are to help people who don't need nursing home care to stay in their homes, according to a newly published Brown University statistical analysis of a decade of spending and nursing home resident data.

"Despite efforts to rebalance long-term care, there are still many nursing home residents who have the functional capacity to live in a less restrictive environment," said gerontology researchers Kali Thomas and Vincent Mor. "States that have invested in their community-based service networks, particularly home-delivered meals, have proportionally fewer of these people than do those states that have not."

Nationwide in 2009, 12.6 percent of nursing home residents were considered "low-care," meaning they did not need much of the suite of services that a nursing home provides. That proportion had declined from 17.9 percent in 2000 because of a variety of efforts, including OAA programs as well as Medicaid-sponsored home- and community-based services (HCBS).

But the percentages every year vary widely between the states. A major reason for that state-to-state variation turns out to be the difference that home-delivered meals can make. The researchers wrote that their analysis boils down to this ratio: For every 25 Dollars per year per older adult above the national average that states spend on home-delivered meals, they could reduce their percentage of low-care nursing home residents compared to the national average by 1 percentage point.

The data included state spending on OAA programs and performance information from each state between 2000 and 2009 as well as variety of public health and nursing home data sources compiled by Brown University's Shaping Long-Term Care in America Project. In all, 16,030 nursing homes were included in the research.
After all the analysis, home-based meals, which served more than 868,000 people in fiscal 2010, emerged as the only statistically significant factor among OAA programs that affected state-to-state differences in low-care nursing home population. Home-delivered meals account for the bulk of OAA spending.

Drivers, after all, not only bring food every day but also observe the condition of their clients. If the elderly beneficiary doesn't answer a delivery, drivers report that. The volunteers therefore provide food and a "safety check" for many older adults.

For many seniors, especially those who don't live with a supportive family, research shows that meal delivery is what allows them to remain where the ring of the doorbell is for their own door.


- More about the Brown University at: www.brown.edu