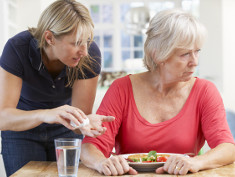 Caring for a relative with dementia is often a burden for the caregiver and impacts the whole life; © Monkeybusiness Images/panthermedia.net

Rhode Island Hospital researchers have found that multiple factors contribute to the burden felt by caregivers of people living with Alzheimer's and other forms of dementia. These factors include the direct impact of providing care upon the caregivers' lives, guilt, and frustration or embarrassment.

The study, conducted by Beth A. Springate, and Geoffrey Tremont, of the division of neuropsychology in the department of psychiatry at Rhode Island Hospital, found that caregivers may benefit from interventions tailored to their specific type of burden.

"Caregivers are often physically and emotionally exhausted when caring for a spouse or parent who is suffering from some form of dementia, including Alzheimer's," Springate said. "There are so many factors that contribute to the burden felt by the caregiver, such as the relationship between the caregiver and patient, the severity of the dementia and the age of the caregiver. There is simply no one-size-fits-all response to their burden, and they would greatly benefit from interventions specific to their situation."

These burdens can have detrimental effects on the caregiver, including poorer physical health, increased rates of emotional distress and depression.

According to the Alzheimer's Association, there are 5 million people in the U.S. with Alzheimer's, and it is the country's sixth leading cause of death. More than 15 million family and friends provide care for those with Alzheimer's and other forms of dementia, resulting in 17.5 billion hours of unpaid care each year.

"It's taxing to say the least," said Tremont, the study's senior author. "Their lives are essentially put on hold while they care for their loved ones, and their own health can suffer as a result. It's hard to worry about taking care of yourself when you feel responsible to take care of someone else, someone who has needs that seem much greater than your own."

The study observed both spousal caregivers and adult children caregivers, with a total of 206 participants. The results of these participants demonstrated that about 84 percent of caregivers reported a clinically significant burden. Within the three factors that were discovered to be significant contributors to burden, frustration or embarrassment showed a direct correlation to the impact on the caregiver's life. The last factor, feelings of guilt, did not show a correlation to the other factors, however, it did show a direct relation to depressive symptoms, as did frustration and embarrassment.

"Guilt, frustration and embarrassment are all very normal feelings when providing care for someone with dementia," Tremont said. "It's important that caregivers know this, and know that they aren't alone."

The researchers noted that limitations do exist to this study because of the predominantly Caucasian female caregiver population caring mostly for patients with Alzheimer's disease, compared to other types of dementia. Due to this and other factors, further research should be conducted.

More about Lifespan at: www.lifespan.org