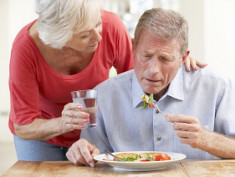 In patients with dementia, poor nutrition may cause symptoms of depression; © Monkeybusiness Images/panthermedia.net

A new analysis has found that a combination of methods that help patients with dementia remember proper eating habits can improve their physical health and lessen symptoms of depression. The study indicates that clinicians should consider using this intervention in individuals with dementia who also have poor nutrition and signs of depression.

In patients with dementia, poor nutrition or decreased food intake may cause symptoms of depression. Investigators including Li-Chan Lin, of the National Yang-Ming University, in Taipei, Taiwan, tested the effectiveness of a combination of methods to train patients with dementia to remember proper eating habits. The intervention incorporated a method called spaced retrieval – a kind of memory training that requires an individual to recall a piece of information at increasing time intervals – and Montessori-based activities, through which structured activities related to daily life are sequentially and repetitively practiced.

Twenty-five participants received spaced retrieval combined with Montessori-based activities with a total of 24 fixed group sessions. Thirty-eight participants received the same intervention with sessions that were adjusted according to each participant's learning response. Twenty-seven control participants just received routine care. Tests for depression, body mass index, and nutrition were conducted before and after the sessions, as well as at one, three, and six months later.

The tests revealed that nutrition improved and body mass index increased over time for individuals receiving either type of intervention with spaced retrieval and Montessori-based activities. Also, depression scores were reduced in parallel with nutrition improvement in participants who received interventions adjusted according to each participant's learning response.

More about Wiley-Blackwell at: www.wiley.com