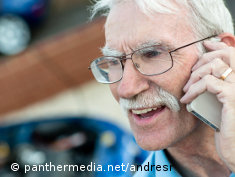 Nearly two-thirds of older adults are willing to be screened for dementia by their physician via phone. This can relief both patients and physicians offices; ©panthermedia.net/andresr

Nearly two-thirds of older adults were willing to undergo telephone screening for dementia, according to a new study from the Indiana University Center for Aging Research and the Regenstrief Institute. Willingness to be screened by phone did not differ by sex, age or race.

The researchers found that the two most significant predictors of willingness to be screened by phone were belief in benefits of early knowledge of cognitive decline and having a friend or relative with Alzheimer's disease. Screening for dementia is designed to detect problems requiring further diagnostic assessment.

"Despite rising incidence rates of Alzheimer's and other dementias, many individuals with cognitive impairment are not screened. They go unrecognized and thus never receive evaluation or diagnosis," said IU Center for Aging Research and Regenstrief Institute investigator Nicole Fowler, Ph.D., who led both studies. "Understanding patients' attitude about the risk and benefits of early identification of dementia is vital as we evaluate potential screening barriers and facilitators."

In 2013 the United States Preventive Services Task Force concluded that the evidence to routinely screen for dementia in primary care is insufficient due to a lack of studies evaluating the risks, benefits and patient perspectives of the value of dementia screening.

"Our study provides insight into what patient's think about dementia screening," Fowler said. "In addition to informing policymakers and researchers, we should make community physicians and others outside the academic community more aware of both the benefits of informing older adults about screening options for dementia and the willingness of this group to undergo screening either in person or by telephone."

Telephone screening is less burdensome to the patient and possibly to the physician's office, she noted.

The 400 older adults in the study were patients of physicians affiliated with two large community health care systems. None of the patients had a dementia diagnosis and less than two percent reported being told by their physician that they suspected memory problems.

Dementia is an overall term for the wide range of symptoms associated with a decline in memory or other cognitive skills severe enough to reduce a person's ability to perform everyday activities. Alzheimer's disease, which is progressive, is the most common form of dementia.

More about Indiana University at: www.indiana.edu
More about the study "Older Primary Care Patients' Attitudes and Willingness to Screen for Dementia"