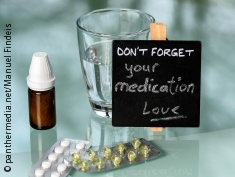 Study finds dementia spending priorities chosen by those living with the disease differ from those in national Alzheimer's plan; © panthermedia.net/Manuel Findeis

More than $100 million in federal funding was spent last year toward searching for a cure for Alzheimer's disease. However, if given the choice, most people with dementia and those caring for them would like to see the money go elsewhere, according to a recent study led by University at Buffalo researcher Davina Porock.

The study surveyed people with dementia and their care providers on how funding from the National Alzheimer's Project Act (NAPA), a federal plan to overcome the disease, should be spent. It revealed that the majority of respondents ranked caregiving support and resources for long-term care ahead of research for a cure.

The findings are in contrast to current NAPA spending to support those with Alzheimer's disease, which dedicated only $10 million to care services and education, according to the Department of Health and Human Services.

With more than 5 million people in the U.S. living with dementia, each person receives less than $2 for care support, says Porock.
"Sure, most people in our surveys would love for there to be a cure, but in the meantime they all have this disease and they need help," says Porock, PhD, professor in the UB School of Nursing.

"We have 10 times more money going toward research instead of supporting the people who are living with dementia. Research is still high on the agenda, but they think that support is more important."
The study, "National Priorities for Dementia Care: Perspectives of Persons Living with Dementia and their Care Partners," was published in the Journal of Gerontological Nursing.

Of the responses, the top five priorities were:

1. Financial resources for respite care and short-term caregiving support - care that typically lasts less than a week and is used to relieve family and daily care providers;
2. Financial resources for long-term care support and aging in place, which includes assistance with nursing home and assisted living expenses;
3. Research for a cure and medication;
4. Education and training for families, health professionals and volunteers;
5. Advocacy and awareness to reduce the stigma of dementia.
Respondents also preferred that not all research funding be allocated to finding a cure. Other areas of focus included workforce issues, education and training, impact on quality of life and the family, and alternative therapies and treatments.

Person-centered approaches to care were a clear theme in many of the responses. Most participants desired the person and family living with dementia, and not the disease, to be the center of care, policy and research.

Dementia is an irreversible condition that slowly impairs memory and cognitive skills, and eventually a person's ability to carry out daily activities. People with dementia often need assistance eating, bathing and dressing, and sometimes have difficulties communicating.
Alzheimer's disease makes up nearly half of all dementia cases, and symptoms typically first appear after age 65.

"Dementia is a major, and increasing, issue in the world because we have more and more people living longer. And one of the consequences of us not dying from heart disease, cancer or other organ failures is that we live long enough for our brains to wear out," says Porock.

Porock hopes the results lead policymakers and the NAPA advisory council to reconsider the priorities for funding to better address the needs of those living with dementia and those who care for them.

Read more about the study at www.buffalo.edu