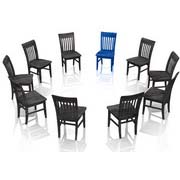 Talking about MS in a group can help;
© Darius Turek

Offering Multiple Sclerosis sufferers emotional support through group therapy sessions could improve their quality of life and save the NHS almost £500 per patient, a study at The University of Nottingham has discovered.

Researchers are now planning a larger multi-centre study into the issue to establish whether psychological therapy should be incorporated into the MS services currently provided by the NHS.

The study, funded by the MS Society, was led by Professor Nadina Lincoln, of the University’s Institute of Work, Health and Organisations. She said: “These are very encouraging findings as many people with MS have problems with depression and anxiety and there are few treatments provided in NHS clinical services to address these. It is important that the psychological effects of MS are fully recognised as they can have a devastating effect on people’s lives.”

Depression and anxiety are common among sufferers of MS, a disabling neurological condition that affects around 100,000 people in the UK.

Previous studies have suggested that depression in MS can lead to patients failing to take their medication and a reduced quality of life. National Institute for Health and Clinical Excellence (NICE) guidelines also recognise that many people with both MS and depression or anxiety would prefer not to take antidepressants and recommends that psychological therapies should be offered as an alternative.

The volunteers were asked to complete questionnaires about how MS affects their daily lives and the extent to which they felt in control.

The patients were then randomly divided into two groups of just over 70 people. One group received all the usual care offered to MS and were put on a waiting list to receive group therapy at the end of the study.The other group was invited to attend a course of six two-hour sessions of group therapy attended by up to eight participants at a time.

The researchers found that those MS sufferers who attended the group sessions had fewer problems with anxiety and depression, the impact of the disease on their daily lives was reduced and their quality of life improved.


- More about the University of Nottingham at: www.nottingham.ac.uk