Depression can lead to work disability 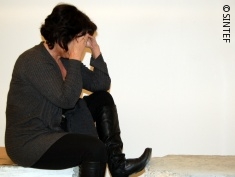 In Norway, men with depression are three times more likely to become work disabled than those without. This risk is only twice as great for women. Researchers at SINTEF and the Nordland and Finnmark hospitals have carried out a study published this summer in the periodical International Journal of Methods in Psychiatric Research.

"We aren't sure why men are at greater risk", says Eva Lassemo, who is a research scientist at SINTEF and main author of the article. "But men more commonly have less well-developed social networks and no-one close who they can talk to", she says. "They also appear to be ashamed of admitting that they have a mental illnesses and wait longer before seeking help. They find it difficult to get in touch with their inner selves and bring their problems out into the open", she says.

In 2001, the researchers conducted diagnostic interviews among a random sample of 1,230 Norwegians, and then monitored them for a ten-year period in the "FDD-trygd" social benefits register. Here they were able to observe correlations between an individual's experiences and his or her medical and work disability histories. This comparative data set thus reveals depression as assessed by means of diagnostic interviews, as opposed to clinical diagnoses made by doctors or psychiatrists.

So, what is the cause of depression among the work disabled? "It's not uncommon for managers in the modern workplace to display little patience for those who are just ‘ailing’ from something", says Lassemo. "In many occupations there's little room for slacking or taking it easy. Depression just isn't an issue for the young – they just keep on going at full throttle. “Efficiency" may sound positive, but it can also entail working harder and faster with more tasks and longer hours, combined with greater levels of supervision", she says.

She adds that previous studies have already demonstrated that it can be detrimental to health if employees have little opportunity to control their activities or work tempo, and the order in which they do things. The same happens if employees experience work as monotonous or stressful, or if they feel that the work they do is meaningless.

"A third factor is that depression is often characterised by feelings such as low self-esteem, that one is a burden to others, or that colleagues are happier when sufferers are absent from the workplace", says Lassemo. "Thoughts such as this – which closely resemble paranoia – can contribute towards people withdrawing from work", she says.

During the last two decades, many countries, including Norway, have observed changes in the demography of disability pension recipients. Nowadays they seem to be younger, with a lower proportion of women. A Norwegian study reveals that while the total numbers of people with depression remained unchanged between 1990 and 2001, the proportion of men had increased. Women appear to cope better socially, and air their troubles with their female friends and relatives much more than men do.

"Women also visit their doctors more frequently, ask for specialist help and probably get better treatment", says Lassemo. "Whatever the reasons, far more women have sought help for depression than men", she says.

The researchers believe that it may be possible to prevent depression by reducing the social stigma associated with mental illness. They also suggest factors such as an earlier acknowledgement that something is wrong and the courage to seek help. "Welfare and work go hand in hand", says Lassemo. "Our working lives are controlled by many political and economic forces, and employers vary greatly in their attitudes towards retaining employees who have been ill or who are on long-term sickness leave", she says.

She wants to see preventive action in terms of knowledge application, openness and the encouragement of compassion. "It's very important both for individual patients and society as a whole to provide early, lasting and effective treatments for depression, not least because these factors can help prevent work disability", she says.