Developing training for integrated housing and support in Europe 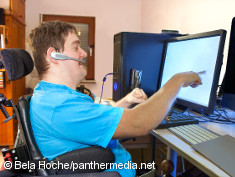 The aim of ELOSH is to transfer innovative learning results and training materials on integrated support and housing; © Bela Hoche/ panthermedia.net

Since October 2013, the European Network on Independent Living (ENIL) has been working with EASPD, SITRA, FEANTSA, Housing Europe and Mental Health Europe, as well as seven organisations in Italy, the Netherlands, Greece, Finland, Slovenia, France and Ireland on a project focused on developing training for integrated housing and support for disabled people (incl. people with mental health problems) and homeless people.

During the 2-year project, funded by the European Commission (Lifelong Learning Programme), ENIL will seek to ensure that disabled people and other service users are actively involved in developing training materials and delivering trainings, alongside service providers. The process – known as ‘co-production’ – is a key element of the project. ENIL has also been working with the project partners to help them establish local coalitions, whose aim is to ensure broad involvement of different groups in the project.

At a meeting in Athens earlier this month, which marked the end of the first phase of the project, the project partners met to discuss the first results of localising the training materials and delivering pilot trainings. Experiences of working with local coalitions, which the partners established to help with localisation, were also shared.

Initial results of the project point to the need for further training on integrated housing and support, especially in countries where this is a new concept, and where the involvement of service users is still very low. Among objectives for the second year of the project, partners identified the need for more training on 'co-production' and the importance of further localising the training materials to better suit the needs of both the service providers and service users in different countries.

In the next months, ENIL will be working to develop a training session on 'co-production', to be delivered during the next partners' meeting in February 2015. The final project conference will take place in September 2015, when the training pack on integrated housing and support in English and six other languages will be launched.