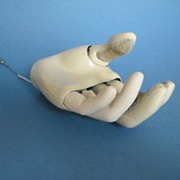 The prosthetic hand from 1945
performed better than the newer
hands; © TU Delft

The development of body-powered prosthetic hands has stagnated for over twenty years. That is the main conclusion of a study by researchers from Delft University of Technology and the University of Groningen into this type of prosthesis.

Gerwin Smit: “The study offers a possible explanation why over half of all people with a body-powered prosthetic hand do not use it or even wear it. Besides this, some prosthetic arm users tend to suffer overload problems over time. These problems may well be a result of the excessive operating force required.” This is currently being researched further.


- More about the Delft University of Technology at: www.tudelft.nl/en