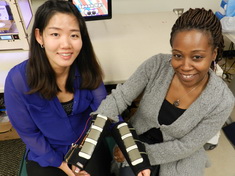 Researchers at Georgia Tech are trying to open the world of tablets to children whose limited mobility makes it difficult for them to perform the common pinch and swipe gestures required to control the devices.

The device, coupled with supporting open-source apps and software developed at Georgia Tech, allows children with fine motor impairments to access off-the-shelf apps such as Facebook and YouTube, as well as custom-made apps for therapy and science education.

"Every child wants access to tablet technology. So to say, 'No you can't use it because you have a physical limitation' is totally unfair," Howard said. "We're giving them the ability to use what's in their mind so they have an outlet to impact the world."

The current prototype of the Access4Kids device includes three force-sensitive resistors that measure pressure and convert it into a signal that instructs the tablet. A child can wear the device around the forearm or place it on the arm of a wheelchair and hit the sensors or swipe across the sensors with his or her fist. The combination of sensor hits or swipes gets converted to different "touch-based" commands on the tablet.

Children with neurological disorders such as cerebral palsy, traumatic brain injury, spina bifida and muscular dystrophy typically suffer from fine motor impairments, which is the difficulty of controlling small coordinated movements of the hands, wrists and fingers. They tend to lack the ability to touch a specific small region with appropriate intensity and timing needed for press and swipe gestures.

The impact of Access4Kids could be significant. More than 200,000 children in the U.S. public school system have an orthopedic disability and have been excluded from tablet and touch screen devices. Current assistive technology, such as Augmentative and Alternative Communication devices, is available to those with motor impairments for traditional computer platforms but not tablets or smartphones.

Howard is creating a second prototype that aims to be more flexible. It will include wireless sensors that can be placed anywhere a child is capable of hitting them, such as with a foot or the side of the head. User trials for the second prototype will begin soon. Howard says she hopes to have the device through clinical trials starting next year.

So far Access4Kids has received positive feedback from both typically developing children and children with disabilities, as well as caregivers. Howard is also working on a version of the device called TabAccess for adults with motor disabilities.