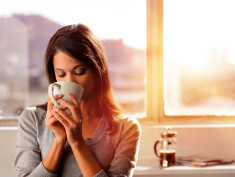 The Mediterranean diet was composed of only a cup of black coffee for breakfast and one large lunch; © Warren Goldswain/panthermedia.net

For patients with diabetes, it is better to eat a single large meal than several smaller meals throughout the day. This is the result of a current dietary study at Linköping University in Sweden.

In the study the effect on blood glucose, blood lipids and different hormones after meals were compared using three different macronutrient compositions in patients with type 2 diabetes. The three diets were a low-fat diet, a low-carbohydrate diet and a Mediterranean diet. The scientists included 21 patients that tested all three diets in a randomized order. During each test day blood samples were collected at six time points.

Furthermore, the total caloric content included energy from 150 ml (women) to 200 ml (men) of French red wine to ingest with the lunch. The food in the Mediterranean diet had an energy content from carbohydrates that was intermediate between the low-fat and the low-carbohydrate meals, and sources of fat were mainly olives and fatty fish.

“We found that the low-carbohydrate diet increased blood glucose levels much less than the low-fat diet but that levels of triglycerides tended to be high compared to the low-fat diet,” says Hans Guldbrand, who together with Fredrik Nyström was the principal investigator of the study.

“It is very interesting that the Mediterranean diet, without breakfast and with a massive lunch with wine, did not induce higher blood glucose levels than the low-fat diet lunch, despite such a large single meal,” says Nyström.

“This suggests that it is favorable to have a large meal instead of several smaller meals when you have diabetes, and it is surprising how often one today refers to the usefulness of the so-called Mediterranean diet but forgets that it also traditionally meant the absence of a breakfast. Our results give reason to reconsider both nutritional composition and meal arrangements for patients with diabetes,” says Nyström.

More about the Linköping Universitet at: www.liu.se