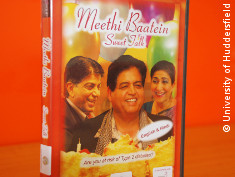 A HEALTH education team that includes University of Huddersfield’s senior academic and researcher in pharmacy practice Dr Mahendra Patel has received a major national award for its work in raising awareness of diabetes among UK Asians. A specially-produced Bollywood-style movie has been among the wide variety of campaigning material that helped to spread the message.

At the 2015 British Medical Journal Awards, the trophy for Diabetes Team of the Year went to a specialist group from the South Asian Health Foundation (SAHF). Dr Patel is a member of the team and joined three of his colleagues to collect the prize at a London ceremony.

During 2014, the SAHF’s diabetes campaigners delivered 11 grassroots education campaigns to a diversity of South Asian communities in seven UK cities where diabetes is known to be most prevalent. This schedule – plus a portfolio of other work – helped to secure the BMJ award.

The material produced by SAHF to back up its message has included a DVD entitled Sweet Talk, which uses Bollywood techniques and imagery to dramatise the risks run by central character, a middle-aged, overweight man who smokes and eats to excess.

A more recent focus has been on special presentations by the SAHF diabetes team – including Dr Patel – that have taken place in venues such as community centres and places of worship. Using a variety of visual aids and printed material, the campaigners have put over their message about how lifestyle changes can cut the risks of diabetes and they also exploded several myths and misconceptions about the disease and treatments.

When they announced that Dr Patel – who is Chair of the South Asian Health Foundation’s Cardiovascular Disease Working Group – and his SAHF colleagues had been awarded the Diabetes Team of the Year title, the judges said: "In early 2014, the South Asian Health Foundation extended its South Asian Community Health Education and Empowerment programme to include South Asians diagnosed with diabetes. This impressive project targeted a high-risk population in seven major cities in the UK and is breaking down cultural barriers by taking important diabetes education out into the communities – to schools, community centres and places of worship, embedding health ambassadors in schools and recruiting local pharmacists as champions. They are achieving powerful attitudinal changes in areas of significant educational need."

Dr Patel stresses that a "one size fits all" approach would not work for the UK’s highly-diverse population of South Asian origin, which includes Pakistani, Indian, Bangladeshi and Sri Lankan communities, with their different cultural, religious and dietary traditions. The health advice must be tailored accordingly, and issues that have arisen include whether or not medication can be taken during periods of fasting.

The campaigners have adopted a "psycho-social model", said Dr Patel, and one message has been that small lifestyle changes – such as switching to semi-skimmed milk and just cutting back on sugar rather than stopping completely – can be highly effective in some communities compared others. Also, he emphasised how community pharmacists can be invaluable in supporting patients to effectively manage their diabetes and associated risk such as heart disease.

More about the University of Huddersfield at: www.hud.ac.uk