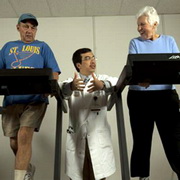 For obese seniors, dieting and exercise together are more effective at improving physical performance and reducing frailty than either alone.

"In older adults, obesity exacerbates declines in physical performance and leads to frailty, impaired quality of life and increases in nursing home admissions. Given the increasing prevalence of obesity even among older people, it is important to find ways to combat the problem and help seniors remain healthier and more independent," says principal investigator Dennis T. Villareal, adjunct associate professor of medicine at Washington University School of Medicine in St. Louis.

Villareal and his colleagues evaluated the effects of dieting and exercise in more than 100 obese seniors over a one-year period. Although weight loss alone and exercise alone improved physical function by about 12 percent and 15 percent, respectively, neither was as effective as diet and exercise together, which improved physical performance by 21 percent.

The investigators evaluated an individual's ability to perform tasks, such as walking 50 feet, putting on and removing a coat, standing up from a chair, picking up a penny, climbing a flight of stairs and lifting a book.

In addition, the researchers evaluated peak oxygen consumption during exertion with treadmill walking. On that test, obese elderly people who both dieted and exercised improved 17 percent from their baseline. The diet-only group showed a 10 percent gain, and the exercise-only group improved about 8 percent.

All subjects in the study were over 65, with some as old as 85 when the study began. Their average age was about 70. Volunteers were randomly assigned to one of four groups. One set of seniors was placed on a low-calorie diet to help them lose weight. Members of a second group attended exercise sessions three times a week, doing balance work, resistance training and aerobic exercise. A third group combined both the low-calorie diet and the exercise. The last group made no changes in diet or exercise habits.

All subjects had medically significant obesity, defined as having a body mass index (BMI) of 30 or more. BMI measures the relationship between a person's height and weight.

"In older, obese people, it may be more important to improve physical function and quality of life, rather than to reverse or treat risk factors for cardiovascular disease," says Villareal. "Combining exercise and weight loss isn't designed so much to extend their life expectancy as it is to improve their quality of life during their remaining years and to help seniors avoid being admitted to a nursing home."


- More about the Washington University School of Medicine at www.medicine.wustl.edu