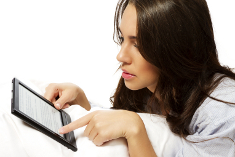 A tablet with a back-lit screen can regain
people's with eye diseases ability to read
quickly; © panthermedia.net/Robert Stranka

People who have eye diseases that damage their central vision can regain the ability to read quickly and comfortably by using digital tablets, according to a recent study. The research found that people with moderate vision loss could increase their reading speed by 15 words-per-minute, on average.

Using a tablet with a back-lit screen resulted in the fastest reading speeds for all study participants, no matter what their level of visual acuity. Loss of central vision affects millions of people who have eye diseases such as macular degeneration or diabetic retinopathy, which damage the light-sensitive cells of the eye's retina. The retina relays images to the optic nerve, which transmits them to the brain. When treatments such as eyeglasses, medications, or surgery are no longer effective, ophthalmologists – eye medical doctors and surgeons – help patients maximize their remaining sight by using low-vision aids. Before digital tablets came along, reading aids were limited to lighted magnifiers, which are cumbersome and inconvenient by comparison.

In the study, which was conducted at Robert Wood Johnson Medical School in New Jersey, researchers found that all of the 100 participants gained at least 42 words-per-minute (WPM) when using the iPad tablet on the 18-point font setting, compared with reading a print book or newspaper. A more modest gain of 12 WPM, on average, was achieved by all subjects when using the Kindle tablet set to 18-point font. Patients with the poorest vision − defined as 20/40 or worse in both eyes − showed the most improvement in speed when using an iPad or Kindle, compared with print.

The researchers believe the iPad's back-illuminated screen is the key to the significantly improved reading speed achieved by patients with moderate vision loss. The vision factor involved is called contrast sensitivity, which means being able see an object as separate and distinct from its background and to discern shades of gray. Loss of contrast sensitivity is common in people with low vision. The high word/background contrast provided by a back-lit screen is a big plus for such patients. The original Kindle, which used in this study, does not have a back-lit screen.

The study also assessed low vision patients' comfort while reading and found that their preferred mode was linked to their degree of vision loss. People with the worst vision found the iPad most comfortable, while those with the best vision preferred print. This information will be useful to ophthalmologists in advising patients with various degrees of vision loss. "Reading is a simple pleasure that we often take for granted until vision loss makes it difficult," said Daniel Roth, who led of the study. "Our findings show that at a relatively low cost, digital tablets can improve the lives of people with vision loss and help them reconnect with the larger world."


- More about American Academy of Ophthalmology at: www.aao.org