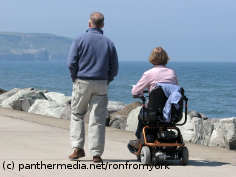 While institutions are known to foster human rights abuses, they are still widely used in EU member states; © ronfromyork/ panthermedia.net

Hundreds of thousands of children, young people, people with disabilities and mental health problems, older or homeless people still live segregated in closed institutions across the European Union (EU), suffering from the life-long impact of institutionalisation.

While institutions are known to foster human rights abuses, they are still widely used in EU member states. Where reforms have indeed taken place, many of them have not been developed in line with human rights obligations, neither were they based first and foremost on the needs and preferences of the people concerned. A lack of meaningful consultation with the parties concerned, together with a lack of available expertise, resistance to change and insufficient political commitment have led to slow and inconsistent changes.

Still, alternatives to residential institutions can and must be developed. International human rights treaties have long advocated for quality community-based services which respond to the needs of each individual. With a long way to go before Europe reaches this objective, the European Expert Group on the transition from institutional to community-based care (EEG), together with MEPs Ádám Kósa and Helga Stevens are bringing this issue to the limelight in a high level debate at the European Parliament on 10 December.

Speakers, including Hasan Bermek, Adviser to the Council of Europe Commissioner for Human Rights, Andriana Sukova-Tosheva, DG Employment Director, and Maria Luisa Cabral, Head of the Disability Unit, will listen to testimonies and discuss how the EU can promote and support the transition from institutional to community-based care at national, regional and local level. The debate will build on the proposals made by the EEG on moving towards a society that is inclusive for all.

The Expert Group is calling on the European Commission to adopt a Recommendation on the transition from institutional to community-based care that would pave the way for policies truly in line with the EU’s international human rights obligations, respond to the needs of each individual, and meet the highest standards of social care. The EEG also believes the new European Parliament must stand up for their constituents across the EU who are still victims of segregation and deprivation of their fundamental human rights, by declaring their political support to the efforts made by the European Commission, Member States and civil society.

More about the European Network on Independent Living (ENIL): www.enil.eu