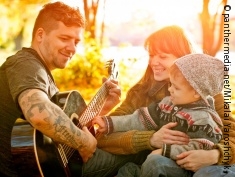 The assumption that parents of children with disabilities are more likely to experience divorce turned out wrong; © panthermedia.net/Mikalai Yaroshchyk

Couples raising a child with developmental disabilities do not face a higher risk of divorce if they have larger families, according to a new study by researchers from the Waisman Center at the University of Wisconsin-Madison.

The study, published in the American Journal on Intellectual and Developmental Disabilities, also compares divorce rates of couples who have at least one child with a developmental disability to that of their peers who have typically developing children.

As a result, there has been "a conception that, in general, parents of children with disabilities are more likely to experience divorce, and we wanted to test that assumption," says Eun Ha Namkung, first author of the paper and a graduate student in social work at the Waisman Center's Lifespan Family Research Program, led by study co-authors Jan Greenberg and Marsha Mailick. Previous research has proven inconclusive.

In the study, the researchers found that couples with typically-developing children who can pitch in to care for and support their siblings with developmental disabilities may experience less marital stress, which can help counterbalance the effects of family size on divorce rates found in the general population.

Namkung and co-authors, including fellow Waisman researcher Jieun Song, used the Wisconsin Longitudinal Study (WLS) for their research. The WLS has been following more than 10,000 men and women who graduated from Wisconsin high schools in 1957 and some of their siblings for more than 50 years, yielding a rich and, more importantly, truly random sample.

"When the WLS began, the participants were still in high school," says Namkung, "whereas most past research recruited parents after they have given birth to a child diagnosed with developmental disabilities."

Using the WLS allowed the researchers to follow 190 parents whose children had a broad range of developmental disabilities, such as autism spectrum disorders, Down syndrome, cerebral palsy and unspecified intellectual disabilities.

The almost six-decade span of the WLS also allowed researchers to track families from the beginning of their marriages until they were in their early-to-mid sixties. Looking at marriages over a longer time period is important because the challenges of caring for a child with a developmental disability can vary tremendously over the lifespan.

While using the WLS provided many research advantages, Namkung does point out some potential shortcomings. The study population was mostly of Caucasian origin, which meant very little ethnic diversity. Participants were also mostly born between 1930 and 1935 and it is possible that examining younger generations would yield different divorce rates.

These are research questions that Namkung and her colleagues intend to pursue in the future. They also plan to "focus on other types of disabilities such as mental illness to better understand the effects of having a child with a particular disability on divorce rates," says Namkung.

More about the University of Wisconsin-Madison at: www.wisc.edu