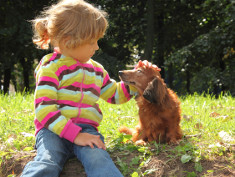 Parents should consider the sensitivities of their children with autism when choosing a pet; © Pavel Losevsky/panthermedia.net

Many families face the decision of whether to get a dog. For families of children with autism, the decision can be even more challenging. Now, a University of Missouri researcher has studied dog ownership decisions in families of children with autism and found, regardless of whether they owned dogs, the parents reported the benefits of dog ownership included companionship, stress relief and opportunities for their children to learn responsibility.

"Children with autism spectrum disorders often struggle with interacting with others, which can make it difficult for them to form friendships," said Gretchen Carlisle, a research fellow at the Research Center for Human-Animal Interaction (ReCHAI) in the MU College of Veterinary Medicine. "Children with autism may especially benefit from interacting with dogs, which can provide unconditional, nonjudgmental love and companionship to the children."

Parents of children with autism should consider their children's sensitivities carefully when choosing a dog in order to ensure a good match between pet and child, Carlisle said.

"Bringing a dog into any family is a big step, but for families of children with autism, getting a dog should be a decision that's taken very seriously," Carlisle said. "If a child with autism is sensitive to loud noises, choosing a dog that is likely to bark will not provide the best match for the child and the family. If the child has touch sensitivities, perhaps a dog with a softer coat, such as a poodle, would be better than a dog with a wiry or rough coat, such as a terrier."

Although her study only addressed dog ownership among families affected by autism, Carlisle said dogs might not be the best pet for every child with autism.

"This research adds scientific credibility to the benefits of human-animal interaction," said Rebecca Johnson, a professor at the MU College of Veterinary Medicine, director of ReCHAI, and the Millsap Professor of Gerontological Nursing in the MU Sinclair School of Nursing. "This research helps us understand the role of companion animals in improving the lives of children with autism and helps health professionals learn how to best guide families in choosing pets for their families."