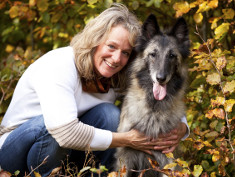 It is possible to use man's best friend as a discreet health barometer;
© Arnd Rockser/panthermedia.net

Monitoring a dog's behaviour could be used as an early warning sign that an older owner is struggling to cope or their health is deteriorating.

Experts at Newcastle University, UK, are using movement sensors to track normal dog behaviour while the animals are both home alone and out-and-about.

Providing a unique insight into the secret life of man's best friend, the sensors show not only when the dog is on the move, but also how much he is barking, sitting, digging and other key canine behaviours.

By mapping the normal behaviour of a healthy, happy dog, Cas Ladha, student Nils Hammerla and undergraduate Emma Hughes were able to set a benchmark against which the animals could be remotely monitored. This allowed for any changes in behaviour which might be an indication of illness or boredom to be quickly spotted.

"A lot of our research is focussed on developing intelligent systems that can help older people to live independently for longer," explains Ladha, who is based in Newcastle University's Culture Lab. "But developing a system that reassures family and carers that an older relative is well without intruding on that individual's privacy is difficult. This is just the first step but the idea behind this research is that it would allow us to discretely support people without the need for cameras."

Behaviour imaging expert Nils Hammerla adds: "Humans and dogs have lived together in close proximity for thousands of years, which has led to strong emotional and social mutual bonds.

"A dog's physical and emotional dependence on their owner means that their wellbeing is likely reflect that of their owner and any changes such as the dog being walked less often, perhaps not being fed regularly, or simply demonstrating 'unhappy' behaviour could be an early indicator for families that an older relative needs help."

In the UK, around 30 percent of households own at least one pet dog, totalling an estimated 10.5 million animals.

Designed to provide an indicator of animal welfare in an age when dogs are increasingly left alone for long periods of time, the team created a hi-tech, waterproof dog collar complete with accelerometer and collected data for a wide range of dog breeds.

"In order to set the benchmark we needed to determine which movements correlated to particular behaviours, so in the initial studies, as well as the collars, we also set up cameras to record their behaviour," explains Ladha.

Analysing the two datasets, the Newcastle team were able to classify 17 distinct dog activities such as barking, chewing, drinking, laying, shivering and sniffing.

The team also assessed the system against different breeds.
"This had to work for all dogs," explains Ladha, "so the challenge was to map distinct behaviours that correlated whether the collar was being worn by a square-shouldered bulldog or a tiny chiwawa."
Hammerla adds: "This is the first system of its kind which allows us to remotely monitor a dog's behaviour in its natural setting. But beyond this, it also presents us with a real opportunity to use man's best friend as a discreet health barometer. It's already well known that pets are good for our health and this new technology means dogs are supporting their older owners to live independently in even more ways than they already do."

More about Newcastle University at: www.ncl.ac.uk