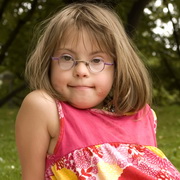 Down syndrome patients with
severe autism behaviours much
more likely to have later onset of
ASD;© panthermedia.net/Lerner

New findings from a 16-year study confirm that the Diagnostic and Statistic Manual of Mental Disorders (DSM), the gold-standard for the classification of mental health conditions, can be used to accurately identify autism spectrum disorders (ASD) in children with Down syndrome.

Autism-like behaviours are often difficult to differentiate from repetitive behaviours, communication difficulties and other cognitive delays associated with intellectual disability. Because of these challenges, physicians often hesitate to diagnose ASD in children with Down syndrome, leaving them unable to receive important therapy and educational services.

“Based on our findings, I encourage parents of children with Down syndrome who display difficulty with social interaction to ask their providers about the presence of autism or other intellectual disabilities,” says Walter Kaufmann, director of Kennedy Krieger’s Centre for Genetic Disorders of Cognition and Behaviour. “Our results will significantly help clinicians in categorising co-morbidities and support them in developing more targeted educational and intervention services for children with Down syndrome.”

The study confirmed the unbiased validity of the DSM for identifying autism in children with Down syndrome by comparing diagnoses based on its criteria with scores from a separate tool, the Aberrant Behaviour Checklist – Community (ABC-C). The ABC-C is one the most commonly used tools for evaluating behavioural problems in individuals with intellectual disabilities and has no relation to the DSM.

The findings suggest that a strategy similar to what researchers employed in this study could be used for confirming the diagnosis of ASD in other genetic disorders. Kaufmann says that the research also demonstrates that the ABC-C can be used as a supportive resource for making the diagnosis of ASD and other behavioural problems in Down syndrome. His hope is that this study provides the evidence clinicians need to confidently use the DSM to diagnose ASD in Down syndrome, ensuring better outcomes for affected children and families.