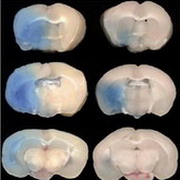 Considerably fewer cerebral edemas
(blue) also occur after a stroke
in mice that are lacking the gene
for the blood protein kininogen
(right);© Christoph Kleinschnitz

Every two minutes someone in Germany suffers a stroke, yet there are hardly any effective treatments. Scientists from the University of Würzburg are now pursuing a new approach: inhibiting a blood protein seems to mitigate the negative consequences of strokes quite dramatically.

Strokes usually occur as follows: blood vessels that supply the brain with oxygen and other vital things suddenly become blocked by blood clots. This causes damage to the brain. Even if the clots are eliminated quickly, many people affected subsequently suffer neurological dysfunctions, such as major paralysis or speech disorders.

There are other factors that are also responsible for damage following a stroke, most notably inflammatory processes in the brain and the formation of a so-called cerebral edema, where fluid from the damaged blood vessels leaks into the brain tissue. Pressure builds as a result, so areas of the brain that were initially healthy can become affected as well.

“This multitude of harmful processes after a stroke is one reason why new treatments have often failed in the past,” says Christoph Kleinschnitz. Ideally, new medications should therefore target several key sites in order to achieve maximum effect.

Medicine could be closing in on this goal with inhibition of the blood protein kininogen since this damages nerve cells in three ways following a stroke: firstly, it promotes the formation of further blood clots in the brain; it also exacerbates both inflammation and cerebral edema.

The scientists worked with mice that were lacking the gene for kininogen. The brain damage suffered by these animals following a stroke was reduced by more than two thirds. They also experienced far fewer neurological dysfunctions. “This protective effect lasted for many days and was observed in both young and old mice, in males as well as females,” says Kleinschnitz. This finding is hugely important, he explains, because gender-specific differences have often been neglected in stroke research.

Next, the Würzburg researchers wish to inhibit the blood protein kininogen not just genetically, but also pharmacologically – with antibodies. This would be an important step on the road to assessing whether the new method might also be trialed in stroke patients at a later date.


- More about the University of Würzburg at: www.uni-wuerzburg.de