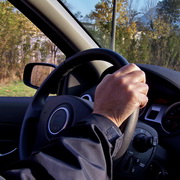 Older people can improve their
driving skills by being coached in
a driving simulator; © SXC

Older drivers could benefit from training programs that put them behind the wheel – in a driving simulator, with an observer who helps them develop their skills.

Older people are at much higher risk of car crashes than younger drivers. Some states and provinces test older drivers, hoping to get the riskiest drivers off the road. But the tests they use are inadequate, says Normand Teasdale of Université Laval in Québec, who cowrote the study with Pierre-Luc Gamache, Carol Hudon, and Martin Simoneau. Some governments only test vision; others test cognition, too. In some cases, on-the-road tests also are required.

But none of these tests is enough – they lack accuracy, sensitivity and specificity. To drive effectively, you not only have to be able to see, hear, and think about what's going on – you also have to be able to turn this sensory input into the right action, like stepping on the brake when you see a red light ahead of you. (And not stepping on the gas instead, a common mistake.)

Teasdale and his colleagues think a better approach is to help older adults improve their skills through the use of proper training using a driving simulator and appropriate feedbacks. In experiments, they've found that coaching helps older drivers improve. For example, in one experiment, older adults were tested on the road, then coached in a driving simulator. "We actually walk them through their errors by showing them their own response," Teasdale says. Then the drivers were tested again on the road – without coaching – and their driving improved. "After the training, they really were aware of why they were making errors and what not to do."

Older people should be able to treat driving the way they do golf or tennis, Teasdale says. "Elderly people, if they want, can pick up the phone and they'll have a golf pro or a tennis pro that will gladly help them for as many hours as they want, on the same day." Driving is just another set of motor skills, but there's no such service for driving. The services that are available are mostly to test older people and tell them if they aren't fit to drive anymore. "So I fully understand why older individuals are reluctant to get into this," Teasdale says.

Teasdale and his colleagues hope that coaches and driving simulators can be made available to more older drivers who are worried about their safety on the road. These methods may help keep older drivers behind the wheel longer without compromising road safety.


- More about the Association for Psychological Science at www.psychologicalscience.org