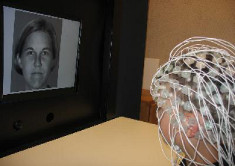 The brain function of the participants was
measured with electroencephalography;
© University of Washington

An autism intervention program that emphasizes social interactions and is designed for children as young as 12 months has been found to improve cognitive skills and brain responses to faces, considered a building block for social skills.

The researchers say that the study is the first to demonstrate that an intensive behavioral intervention can change brain function in toddlers with autism spectrum disorders. "So much of a toddler's learning involves social interaction, and early intervention that promotes attention to people and social cues may pay dividends in promoting the normal development of the brain and behavior," said Geraldine Dawson, chief science officer for the advocacy group Autism Speaks. "For the first time, parents and practitioners have evidence that early intervention can result in an improved course of both brain and behavioral development in young children," she said.

Dawson began the study while she was the director of the University of Washington (UW) Autism Center. Forty-eight children, aged 18 to 30 months and diagnosed with autism, either participated in routine community-based interventions or the Early Start Denver Model (EDSM), which emphasizes interpersonal exchanges and shared participation in activities.

Participants received one of the interventions for about 20 hours each week over a period of two years. For the children randomly assigned to the ESDM group, treatment took place two hours, twice a day, five days a week, by trained interventionists who came to the child's home. The children got an extra boost from their parents, who were trained to use ESDM strategies during routine exchanges with their child.

After two years of treatment, the brain function of the participants – now about four to five years old – was measured with electroencephalography while the youngsters viewed social stimuli, such as faces, and nonsocial stimuli, such as toys. "Humans are experts at processing faces, but the brains of children with autism have delays in the ability respond to faces," said co-author Sara Webb. If the brain can quickly identify a face, she said, then it can build on this to also quickly decide whether the face is of a man or a woman, happy or sad, and familiar or not.

Looking at a higher level of brain processing, the researchers studied whether the treatments changed brain measures of attention and cognitive engagement when seeing faces compared with a nonsocial stimulus. Eleven of 15 – or 73 percent – of children in the ESDM group showed greater attention to faces than to toys. In contrast, the EEGs of only five of the 14 recipients of the community intervention, or 36 percent, showed similar activation.

"The ESDM intervention resulted in greater attention and cognition brain activity to social stimuli, and these brain function patterns are more similar to the typical developing group of children," Webb said. She stressed not only the importance of receiving intensive early intervention for autism, but that the intervention should focus on enhancing social attention, reciprocal interactions and engagement with a social partner.


- More about University of Washington at: www.washington.edu