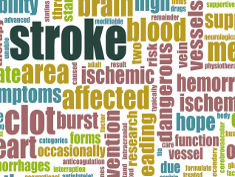 About 10 percent of strokes occur in 18- and 50-year-olds; © kenthoh/
panthermedia.net

One-third of people who survive a stroke before age 50 are unable to live independently or need assistance with daily activities 10 years after their stroke.

“Even if patients seem relatively well recovered with respect to motor function, there may still be immense ‘invisible’ damage that leads to loss of independence,” said Frank-Erik de Leeuw, Ph.D., senior author of the study and associate professor of neurology at the Radboud University Nijmegen Medical Center in the Netherlands.

Researchers assessed the function of 722 people who had a first stroke when they were age 18-50. After an average follow-up of nine years, about one-third had at least moderate disability, requiring assistance for some activities. Many were also unable to conduct routine tasks independently, such as caring for themselves, doing household chores or looking after their finances.

Upon closer investigation, researchers found the rate of poor functional outcome and the ability to live independently varied by type of stroke:

After a transient ischemic attack (TIA, or ‘mini-stroke’), 16.8 percent had functional disability and 10.8 percent had poor skills for independence.

After an ischemic stroke, caused by a blood clot in the brain, 36.5 percent had functional disability and 14.6 were unable to live independently.

After a hemorrhagic stroke, caused by a brain bleed, 49.3 percent had functional disability and 18.2 percent didn’t have the skills for independent living.

“Most doctors view young stroke patients as a group with great recovery opportunities,” de Leeuw said. “But our study is the first to show these almost life-long effects of stroke on performance. This is important to communicate right from the start to patients and families.”

The researchers are investigating factors most responsible for poor functional outcome.

“We don’t know if it’s cognition, depression, problems in their families or relationships or other factors, but once we do, we can develop more effective interventions,” de Leeuw said.

More about the American Heart Association at: www.heart.org