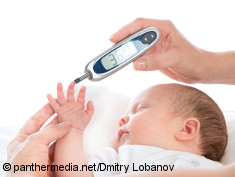 The study found that there are three ways to predict the development of type 1 diabetes; © panthermedia.net/ Dmitry Lobanov

New research shows that it is possible to predict the development of type 1 diabetes. By measuring the presence of autoantibodies in the blood, it is possible to detect whether the immune system has begun to break down the body's own insulin cells.

"In the TEDDY study we have found that autoantibodies often appear during the first few years of life", said Professor Åke Lernmark from Lund University, who is leading the study in Sweden.

The TEDDY study, funded by the US National Institutes of Health (NIH), involves 8 600 children from Sweden, the US, Germany and Finland. The children have an increased hereditary risk of type 1 diabetes, detected at birth through tests on blood from the umbilical cord. TEDDY stands for "The Environmental Determinants of Diabetes in the Young".

The new findings from the TEDDY study have been published in the journal Diabetologia and show that there are three ways to predict the development of type 1 diabetes.

Three ways to predict development of type 1 diabetes
1. If the autoantibody first discovered attacks insulin (IAA)
In Sweden this usually takes place at the age of 18 months. However, in the study as a whole most babies affected were less than a year old. "If a second autoantibody is detected later, then the person will get diabetes - but it may take up to 20 years", said Åke Lernmark.

2. If the first autoantibody targets GAD65 (GADA), a protein inside the insulin-producing cells
In Sweden this usually happens at the age of two and half, whereas in the study as a whole it was most common at the age of two.

3. If both autoantibodies are first found together
"In TEDDY, 40 per cent of these children had already developed diabetes", said Åke Lernmark.

Of the participating children, 6.5 per cent had their first autoantibody before the age of six.

The hereditary risk of type 1 diabetes determined which autoantibody the children had. However, it is still not known what causes the immune system to start attacking the body's own insulin cells to start with. One theory is that a viral infection could be the trigger.

More about the Lund University at: www.lu.se