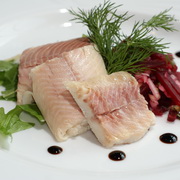 People who eat baked or broiled fish on a weekly basis may be improving their brain health and reducing their risk of developing mild cognitive impairment (MCI) and Alzheimer's disease, according to a study.

"This is the first study to establish a direct relationship between fish consumption, brain structure and Alzheimer's risk," said Cyrus Raji from the University of Pittsburgh Medical Center and the University of Pittsburgh School of Medicine. "The results showed that people who consumed baked or broiled fish at least one time per week had better preservation of gray matter volume on MRI in brain areas at risk for Alzheimer's disease."

For the study, 260 cognitively normal individuals were selected from the Cardiovascular Health Study. Information on fish consumption was gathered using the National Cancer Institute Food Frequency Questionnaire. There were 163 patients who consumed fish on a weekly basis, and the majority ate fish one to four times per week. Each patient underwent 3-D volumetric MRI of the brain. Voxel-based morphometry, a brain mapping technique that measures gray matter volume, was used to model the relationship between weekly fish consumption at baseline and brain structure 10 years later. The data were then analysed to determine if gray matter volume preservation associated with fish consumption reduced risk for Alzheimer's disease. The study controlled for age, gender, education, race, obesity, physical activity, and the presence or absence of apolipoprotein E4, a gene that increases the risk of developing Alzheimer's.

The findings showed that consumption of baked or broiled fish on a weekly basis was positively associated with gray matter volumes in several areas of the brain. Greater hippocampal, posterior cingulate and orbital frontal cortex volumes in relation to fish consumption reduced the risk for five-year decline to MCI or Alzheimer's by almost five-fold.

"Consuming baked or broiled fish promotes stronger neurons in the brain's gray matter by making them larger and healthier," Raji said. "This simple lifestyle choice increases the brain's resistance to Alzheimer's disease and lowers risk for the disorder."

The results also demonstrated increased levels of cognition in people who ate baked or broiled fish.

"Working memory, which allows people to focus on tasks and commit information to short-term memory, is one of the most important cognitive domains," Raji said. "Working memory is destroyed by Alzheimer's disease. We found higher levels of working memory in people who ate baked or broiled fish on a weekly basis, even when accounting for other factors, such as education, age, gender and physical activity."

Eating fried fish, on the other hand, was not shown to increase brain volume or protect against cognitive decline.


- More about the Radiological Society of North America at www.rsna.org